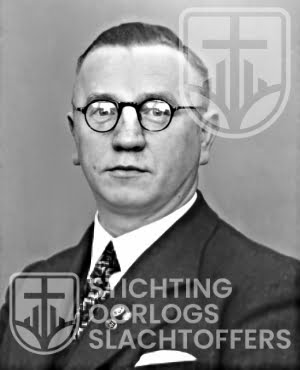 The annually recurring consternation and negative publicity about the commemoration of the dead (Volkstrauertag) at the German military cemetery in Ysselsteyn and the sometimes understandable reactions about the SS’ers, collaborators and war criminals, have moved us to do further research about one of the most talked about persons from this group of war dead who has his last resting place at this special cemetery … Julius Dettmann.

Dettmann is known as the German officer of the Sicherheitsdienst who, on 4 August 1944, allegedly received a tip by telephone from the suspected betrayer of Anne Frank and the seven other people in hiding in the rear annex of the canal house at Prinsengracht 263 in Amsterdam. Little or no information is available online about Julius Dettmann, let alone what he actually looked like. On some sites, for example, you will find a photo of a German fighter pilot accompanying his name. Through our research we try to give you, as a visitor of our site, more information about- and a face to one of the most hated person in the Netherlands, during and after the Second World War.

Julius Dettmann was born on 23 January 1894 in Ponarth, a district of the then East Prussian capital Königsberg-Preußen (today Kaliningrad, Russia). He was born the son of transport operator Friedrich Dettmann and Bertha Dettmann, born Lenzner, Julius was baptised by his parents and brought up as a Protestant.

From the age of 6 to 14 Dettmann attended primary school and primary school in his home town, then in 1908 he joined a drapery shop in Königsberg-Preußen as a sales apprentice. After his apprenticeship ended in 1912, Julius worked as a Kaufmann (trader or merchant) for various companies. In October 1914 Dettmann volunteered for two years with the 1. Ostpreußisches Feldartillerie-Regiment Nr. 16 (1st East Prussian Field Artillery Regiment No. 16) in Königsberg. In June 1914, he was transferred to the field artillery school in Jüterbog, with which he also went into the field. After Dettmann had participated in the campaign with this troop for a year, he was transferred to the anti-aircraft unit, where he stayed until the end of World War I. During World War I, he was promoted to the rank of officer. During World War I, he was promoted to corporal, later to Vizewachtmeister (sergeant petty officer) and in 1918, Dettmann was discharged from the army. In January 1919, Dettmann rejoined his old unit in Königsberg and in March 1919, he was assigned to the Militärischen Polizeistelle (military police). After this unit was transformed into the Landesgrenzpolizei (State Border Police) in October 1919, Dettmann was taken into police service and at the same time permanently discharged from Heeresdienst (army service).

On 23 April 1920, Dettmann, in the meantime in the rank of Grenzpolizeiwachtmeister (watch-master in the border police), married Auguste Marie Gertrud Goß, born on 3 May 1896 and also in Königsberg, daughter of civil servant Hermann Goß and his wife Auguste Goß, born Funk. From this marriage a son named Frank Julius was born in Königsberg on 29 March 1921. During his work in the criminal police, Dettmann was transferred several times; his last transfer before the beginning of the Second World War was on 1 May 1934, from the Wuppertal criminal police to the Koblenz state police. On 2 January 1936, the young family moved into a house at 5 Schwerzstraße in Koblenz.. 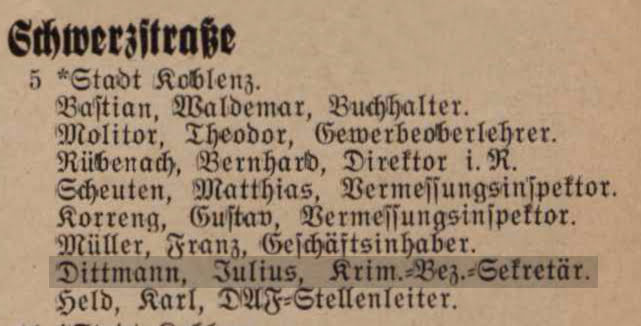 .
Thus, Julius Dettmann can be found at the above address in the historical telephone directory of Koblenz, however, with the following spelling variant; “Dittmann, Julius, Kriminalbezirkssekretär” (Secretary of the penal district), in a later edition (1939-1940) the surname was spelled correctly; “Dettmann, Julius, Kriminalsekretär” (penal secretary). 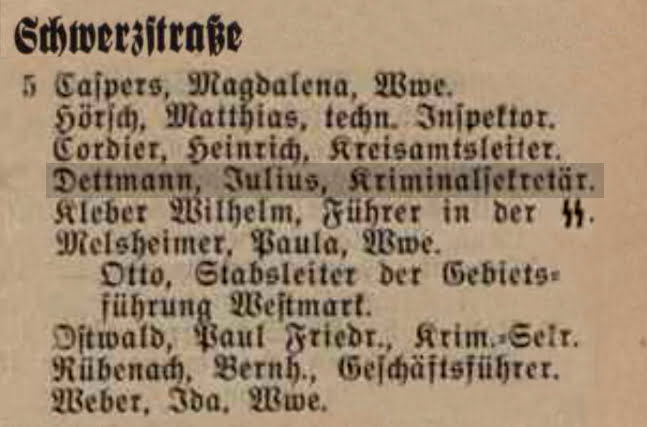 The house at the Schwerzstraße 5 in Koblenz was located opposite the Jewish cemetery “Rauental”, which was destroyed during the Kristallnacht (in the night of 9 to 10 November 1938). The tombstones were used during the Nazi period for the construction of a staircase in the garden of a kindergarten in Koblenz-Lützel as well as for the National Socialist Motherhouse in Koblenz. The Jews who died between 1938 and 1942 and were buried in Koblenz were not allowed a gravestone during the Nazi period.

In order to prove his Aryan descent, Dettmann urgently needed the birth certificate of the master shoemaker Adolf Linzer, who died in 1872, his maternal grandfather, so on 28 July 1939 he wrote a request to the Catholic Parish Office in Schippenbeil (now Sępopol, Poland). However, his grandfather’s place of birth is not recorded in either the Catholic or Protestant churches; it is said that he was an immigrant from Salzburg. In the kleine SS-Ahnentafel (small SS book of records) it says that Julius’ paternal grandfather was a child born out of wedlock, in the church register at the child’s birth there is no mention of the father.

On 1 October 1939, Dettmann became a member of the Nationalsozialistische Deutsche Arbeiterpartei (National Socialist German Workers’ Party) under number 7220240 and his position became that of Kriminal-Obersekretär (chief penal secretary). His wife Gertrud became a member of the NSF NS-Frauenschaft (Women’s Organisation of the National Socialist German Workers’ Party) and the NSV Nationalsozialistische Volkswohlfahrt (National Socialist People’s Welfare). On 15 December 1941 Julius Dettmann joined the Schutzstaffel or SS (protection squad) under number 414783. At the same time he was promoted to SS-Untersturmführer (second lieutenant) and assigned, by order of the Reichssicherheitshauptamtt (umbrella security service of the Third Reich), to the Stapo-leitstelle Posen (Posen State Police Headquarters) (now Poznań, Poland). On 10 April 1940, the Dettmann family moved into a house at Ackerstraße 17 in Posen and on 9 November 1942, Julius Dettmann was promoted again, this time to SS-Obersturmführer (First Lieutenant). 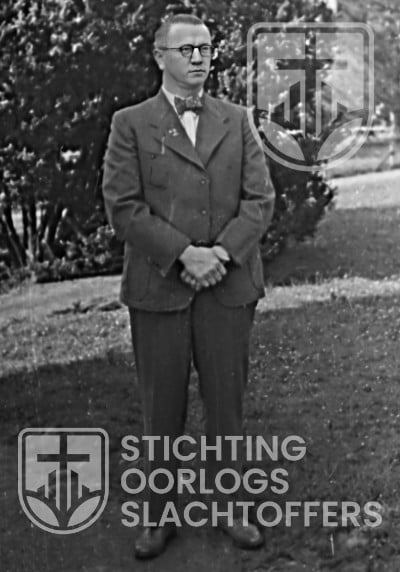 Unfortunately, due to the great loss of documents as a result of the war, it is not uncommon for the archives to contain no or only a few references to individual soldiers; it remains unclear where, when and what other positions Dettmann held.

Eventually Dettmann was stationed in Amsterdam via The Hague in 1943, his last known residential address was Cliostraat 65 in Amsterdam, just a few minutes walk to his new workplace at the then Euterpestraat 99, his file however reads “Gestapo, Apollolaan 99”. About Kriminalinspektor, SS-Obersturmführer Julius Dettmann there are a number of witness reports about his period in the Netherlands. In these reports he is described as “brave, but an unbelievable bully and sadist”. For example, in retaliation for the deadly attack on SS-Sturmscharführer (Sergeant-Major) Ernst Wehner, he proposed to his superior that the 15 detainees of these actions should not be executed by a firing squad, but by a shot in the neck, which Dettmann considered more effective, given his previous experience with this type of execution method in Poland. In addition, Dettmann had volunteered to carry out these executions on 16 July 1944 in the dunes of Overveen.

Dettmann had a leading position in the Judenreferat (Jewish section) IVB4 of the Gestapo in Amsterdam, the Dutch section of the Reichssicherheitshauptambt (Reich Security Headquarters) in Berlin. In the Aussenstelle Amsterdam des Befehlshabers der Sicherheitspolizei und des Sicherheitsdienst (outer office of the security police and security service in Amsterdam) Dettmann would have received a tip by telephone, probably in the morning of 4 August 1944, about Jewish hiders at Prinsengracht 263. Subsequently, Dettmann would have ordered his subordinate, SS-Hauptscharführer (sergeant major) Karl Josef Silberbauer, to raid the alleged safe house. This led to the arrest of eight Jewish people in hiding, including Anne Frank, a Jewish girl who was “unknown” at the time..

Below a Radio-Oranje broadcast and the Oranje-Bulletin no. 19, of Saturday 28 October 1944. Published in response to the murders committed by the Gestapo in the night of 23 to 24 October 1944, in retaliation to the fatal attack earlier that day on an employee of the Sicherheitsdienst, Herbert Gottlob Felix Oelschlägel.

Although the German occupying forces had capitulated on 5 May 1945, people were killed and wounded during the liberation celebrations of 7 May around ‘de Dam’ in Amsterdam, when armed German soldiers opened fire on the crowd that was about to welcome the liberators. After the liberation, mass arrests followed in Amsterdam of people in German military and administrative service, collaborators and anyone else suspected of helping the occupier.

On 11 May 1945, Julius Dettmann was arrested and remained a prisoner of war under the number ‘C 29’ in the ‘House of Detention II’ at Havenstraat 6 in Amsterdam until he took his life by hanging in his cell at the age of 51 on 25 July 1945 around 04.00 in the morning. It was assumed by some that the suicide by hanging was staged to cover up the possible murder of the hated SS man, but this was never proven. 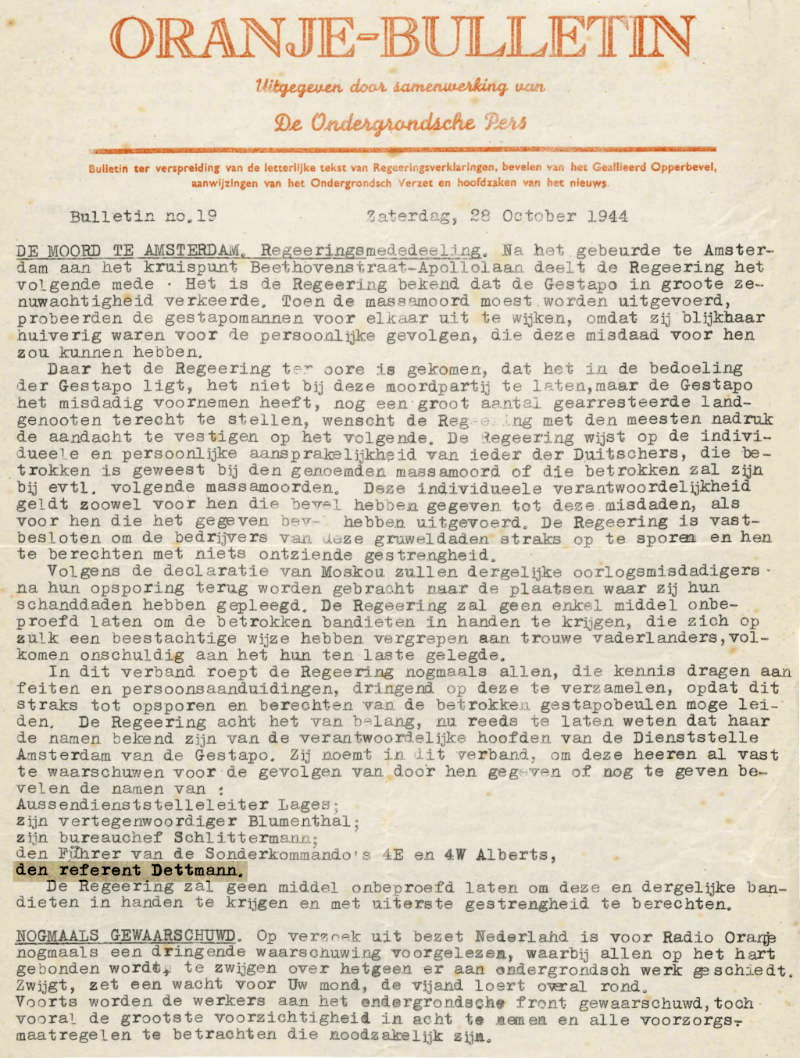 Due to his own death, Julius Dettmann could never be interrogated about the aforementioned raid on the secret annexe of Prinsengracht 263. The answer to the question “who betrayed the people in the Annex” might therefore remain unanswered forever. (*more on this below)

On 31 July 1945, at approximately 08:42 hours, Dettmann was buried in the Noorderbegraafplaats in Amsterdam (class 5, section 10, row X, grave 3). Eleven years later, 17 August 1956, the remains were exhumed by the burial service of the regiment intendancetroepen of the Royal Netherlands Army and transported to their final resting place at the German military cemetery in Ysselsteyn (L) and reburied on 30 August 1956 (box AJ, row 10, grave 228). 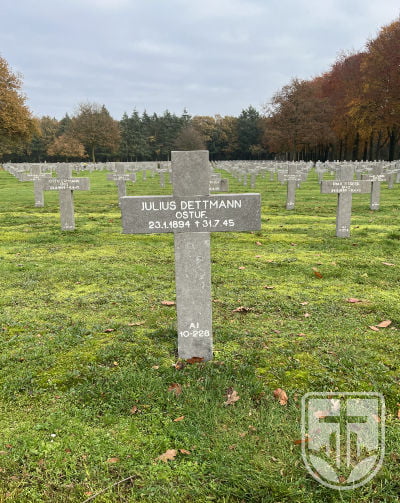 Wife Gertrud and son Frank Julius moved to Recklinghausen after the war, on 23 April 1946, and they moved into a house at Königstraße 20. When the British founded the state of North Rhine-Westphalia in 1946, Frank Julius was registered as a trainee at a mining authority of this state to train as a specialist in demining. On 1 January 1949 Frank Julius moved to Schaalby in the German state of Schleswig-Holstein where he worked as a Dolmetscher (interpreter). According to the registration register of the municipality of Schaalby, Frank Julius Dettmann de-registered on 12 May 1953 and left for Hollingstedt in Schleswig-Holstein, his last known address is Ansgarweg 8.

.
*Surprised by the recently published five-year investigation of an international cold case team into the betrayal of Anne Frank and the seven other people in hiding in the Secret Annex, I decided, before the publication of this article, to contact the cold case team concerned (consisting of police officers, historians and other specialists) to ask whether a detailed investigation of Julius Dettmann or his surviving relatives had also been carried out.

Via the Head of Research, Pieter van Twisk, I received the following response.

“The familie of Julius Dettmann was not approached. The reason why we did not pursue this lead was simple: Dettmann never returned to Germany and committed suicide (or was killed) on the 25th of June 1945 while in prison. At that time the Anne Frank arrest was just another arrest among many. We do not think that he had time, opportunity nor the motive to send files home or talk to relatives about this case.”

The above clear but at the same time disturbing answer from the cold case team that completed its investigation without doing any further historical research into one of the possible protagonists, this solely due to the cold case team’s thinking that Dettmann had no time, opportunity or motive to send files home or elsewhere, shows in my opinion that more historical research is needed. The cold case team bases its theory mainly on a copy of an anonymous note that Anne Frank’s father supposedly received in 1945.

The collected file of Julius Dettmann with a large number of documents and photos (not published on this page) is available for inspection from the author.

Did you find this article interesting? Our article about Samuel van der Hoeden, Anne Frank’s dentist, who went into hiding in Deurne during the Second World War and survived there, might also be of interest to you. Visit this article via the link below!

With your support, we can do even more research and provide you with informative and interesting articles!