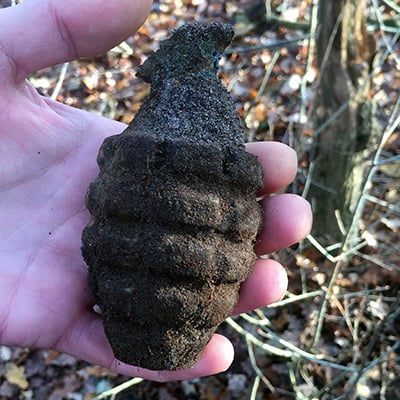 For one of our investigations into a German soldier possibly buried anonymously in the municipality of Deurne, I was conducting field research on disdag 8 December 2015, together with Cor Slaats and Piet Smits from Liessel. During an exploratory phase of the suspected grave site, we unexpectedly found an explosive at a depth of only 15 centimetres. After carefully exposing the explosive, it soon became clear that it was an American Mk 2 hand grenade, missing the safety pin with ring and the ignition lever, which were also found a little later near the location where the hand grenade was found. The hand grenade was covered with sand and the location marked so that, after notification to the appropriate authorities, the exact location could be easily traced.
Unfortunately, it is not obvious for every finder of an explosive to report his find, but it is obvious for us because this hand grenade can also be found by someone who does not know how to handle it responsibly. For example, better children’s metal detectors are coming on to the market that also respond to such an explosive and not all explosives are immediately recognisable and sometimes turn out to be not as innocent as they look. 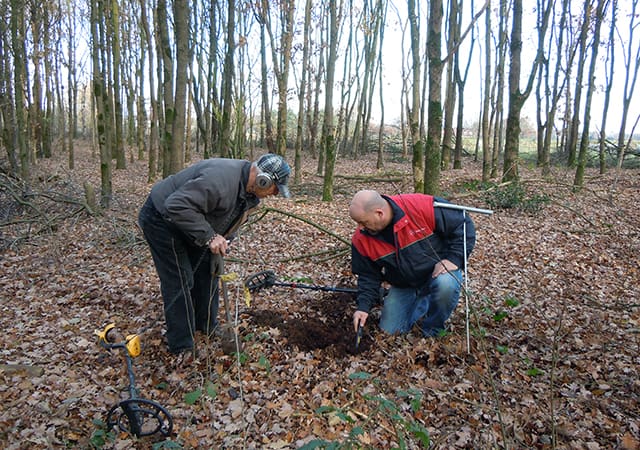 Because explosives are usually buried for a longer period of time, they may have become unstable due to erosion and it is therefore important that you always dig carefully to avoid hitting the explosive with your digging equipment. Stop digging immediately if you find ammunition or other dangerous-looking objects and warn the police immediately, who will instruct you on what to do.