Why no missing Dutchman 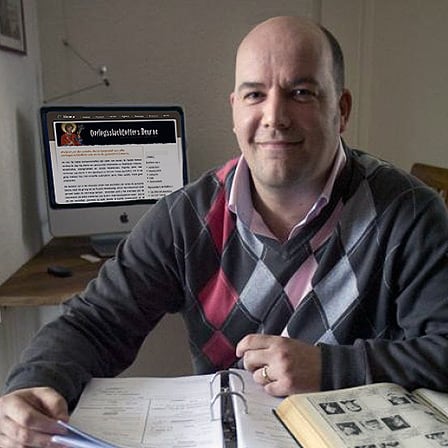 “Older people sometimes do not understand why I deal with German soldiers from the Second World War. ‘Why are not you looking for missing Dutch soldiers?’ They ask. My answer is uncomplicated: because too little is done for all the German war victims, because almost nobody cares about them. They too were humans. A war victim is a war victim. I am no longer pro or anti-German like any other.”

The 39-year-old Richard Schoutissen from Deurne is aware of the fact that he has a strange hobby, anyway in relation to his age. He finds – in most cases at the request of private persons, sometimes also authorities – German war victims back.

A somewhat out of control hobby, he finds himself. According to his wife, an addiction is busy day in and day out, if not physically, but at least in his head. He works 20 hours a week as an administrative clerk and is a houseman the rest of the week. Especially the second activity fits well with his hobby. “Even if I scratch my head, when the children say to me: Dad, what have we been walking around in the cemetery again!”

Schoutissen has always been interested in World War II. His fascination for German soldiers and their history began thirteen years ago when he visited the German War Cemetery in Ijsselstein as the new inhabitant of Deurne. “I started talking to an elderly lady who was standing at her father’s grave. She wanted to put his life story down in writing, but knew nothing about him. I did that for the research and I found it extremely interesting. “Schoutissen had a Contact with the World War One Victims’ Organization and the ‘Interests Community’, where he also became a member. “I handle requests from the Netherlands for these organizations. Often it is about individuals who are in search of a missing German soldier, but also authorities and other organizations contact me. For example, the Canadian government recently asked me to find a German soldier who died in Poland.

The Salvage and Identification Authority of the Dutch Army also regularly inspects me. And from the United States came a request to find a German. “Whether his hobby has an end? He shows us a book with photos of 8000 missing soldiers. “There are 40 of these books. There are still thousands of soldiers buried. So far, the data are known from 440,000 soldiers at 14,000 cemeteries. “

That some people will not thank him for his research does not stop Richard Schoutissen from going further. “After all these years you should be able to talk about the fact that over 145 Germans died in Deurne.”