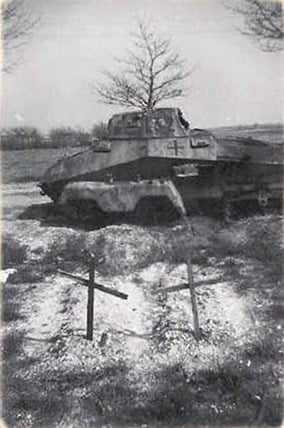 A small photograph of two field crosses and a burned out German army vehicle in Liessel lacked any explanation for a long time. The exhibition ‘Deurne liberated 70 years’ changed that.

Door Frank van den Heuvel | Eindhovens Dagblad | YSSELSTEYN/LIESSEL – The picture was sent to Harrie Martens for ten to fifteen years in a shoebox. He wrote more books about Liessel in the past and is known in the village for his involvement in the local history. “That’s why they came to me at the door. The photos came from the estate of the Van Moorsel family, who used to live on the Kanaalstraat in Liessel.

The young people – they came from Asten – were sorry to throw the box away and thought: maybe Harrie can do something with it. “One of the images showed two crosses with a devastated German vehicle of discovery in the background. Further explanation was missing: no names, no placeholder. Harrie Martens once again made the photo appear in the preparations for the exposition ‘Deurne 70 jaar Be vrijd’ in the Deurnese heemka mer, last fall. Martens: “Theo Vosmeer, one of the heme experts who were involved in the exhibition, found it with a typical image. The photo was enlarged and got a spot in the exhibition, Theo put the photo on DeurneWiki.”

Richard Schoutissen, de Deurne, who does a lot of research into German war victims and manages his own website, saw the photo by chance during the annual photo and film evening of the local history circle and asked Harrie Martens for extra information. The image was also shown at the photo reconnaissance meetings of the Liessels Historisch Erfgoed (LHE). Jan Goevaerts was there too and was surprised. “I recognize the military vehicle, which had a handlebars on both sides. I thought that was so special, I never forgot. “Goe vaerts was eight years old at the time. “But I can still see it.”
Goevaerts knew that crosses and the eight-wheel armored car did not stand on the Kanaalstraat, as was suspected, but on the Snoertsebaan, near the Brink and the Veldhoeve. Then it went fast. Jan and Schoutissen sought contact and thanks to the extensive archive of Schoutis sen all puzzle pieces slowly fell into place.

The name of one of the two German soldiers was traced via the documentation of Schoutissen: Heinrich Kessler, born on October 15, 1918, died on October 29, 1944, during the bloody ‘Battle of the Peel’, where the German troops set up and briefly recaptured Liessel, Neer Kant and Meijel.
Kessler was reclaimed after the war at the German cemetery in Ysselsteyn. Beside him is the soldier who had also been lying next to him on the Snoertse track. With him no name on the cross, but the indication: ‘Ein Deutscher Soldat’.
An anonymous photo in a full shoe box got more and more color in the past few months. Goevaerts and Martens: “That seventy years later, through a series of coincidences, the backs of those crosses and the leaning vehicle comes up, that is quite special.”

DEURNE – Thanks to the archive of Deurnenaar Richard Schou tissen, more information was found about the two German sol dates, which were buried in 1944 at the Snoert sebaan in Liessel. Schoutissen has been conducting intensive research for years into war victims, especially from the German side. He says: “After Jan Goevaerts had told us that the reconnaissance vehicle had been on the Snoertsebaan, we went to that place together. Back home I went into my archive. It was already known that soldier Heinrich Kessler had been buried in a field grave at this location, so I first looked at his file. It was noted in the documents that the field grave – when the remains were salvaged in 1949 – was marked with a wooden cross without writing. Exactly like in the picture.”

“It could of course be that the remains of the two soldiers were still present, were it not that I quickly found his file with the unknown German soldiers. The same location, the same grave marker.
So a match.”
“I have now started a detailed investigation into Heinrich Kes sler and try to trace the survivors. Because the number of the vehicle is clearly visible, I could still check on this way whether these two soldiers actually belonged to the crew. In this way the second, unknown soldier could also be pulled out of anonymity.”