Volkstrauertag (commemoration of the dead) is a national day of remembrance in Germany and belongs to the so-called quiet days. Since 1952, it is celebrated two Sundays before the first Sunday of Advent and commemorates the victims of war and tyranny of all nations.

The Volkstrauertag was introduced in 1919 by the Volksbund Deutsche Kriegsgräberfürsorge (German War Graves Commission) as a day of commemoration for the fallen German soldiers of World War I. On 5 March 1922, the first commemoration hour took place in the Reichstag. Volkstrauertag was celebrated for the first time on 1 March 1925, in 1926 it was decided that Remembrance Sunday (the fifth Sunday before Easter) would be celebrated regularly. Everywhere there were commemorations for the German victims of the First World War.

On 9 November 1930, the NSDAP in the state of Hesse called for a “Day of Mourning for our fallen”. This was, of course, primarily intended for the victims of Hitler’s putsch of 9 November 1923.

After the death of Reich President Paul von Hindenburg on 2 August 1934, the National Socialists took over the Volkstrauertag and established it as a holiday on the second Sunday of Lent. Through direct intervention of the Volksbund chairman Siegfried Emmo Eulen with propaganda minister Joseph Goebbels, the Volkstrauertag was renamed Heroes’ Day in 1934 and its character changed completely. The emphasis should no longer be on commemorating the dead, but on hero worship. The Wehrmacht and the NSDAP were responsible. The flags were no longer hoisted at half mast, as before, but at full mast. Goebbels gave the guidelines for content and execution. The propaganda effect of the day was valued so highly that all decisive steps in the preparations for the war up to and including 1939 were placed on a date in the immediate vicinity of Heroes’ Remembrance Day.

After the end of the Second World War, a discussion on the introduction and date of a national day of mourning started in 1946 in the three western occupation zones. In 1950, the first central meeting of the German War Graves Commission took place in the Bundestag in Bonn. The central wreath-laying ceremony for Volkstrauertag took place from 1951 to 1963 at Bonn’s North Cemetery, from 1964 to 1968 with honorary formations of the German armed forces at the then Gedenkstätte der Bundesrepublik Deutschland on the Hofgarten, and then again at the North Cemetery. 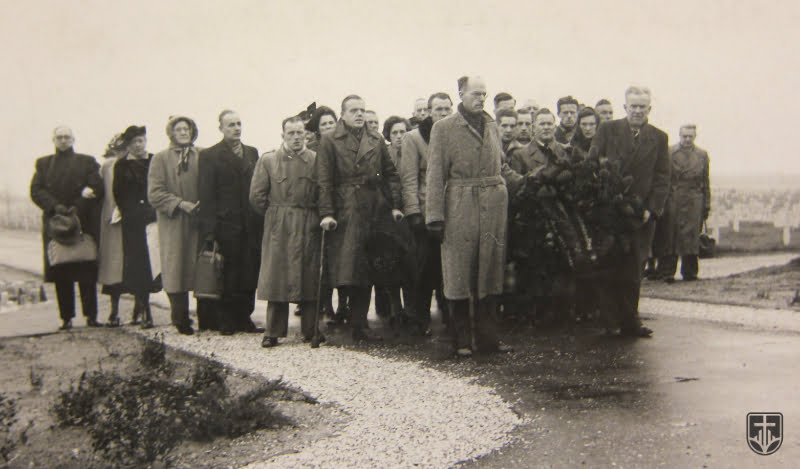 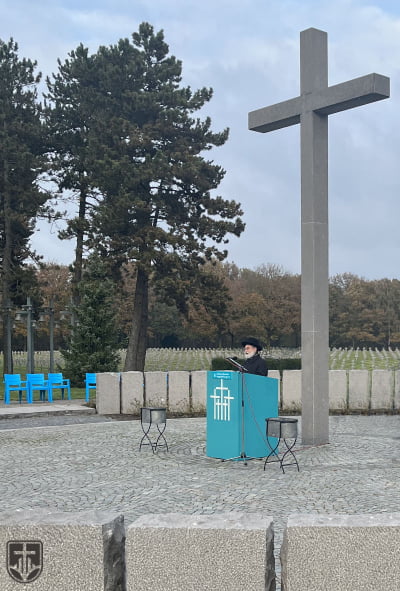 Since the beginning of the 1990s, the new federal states have protected the Volkstrauertag in their public holiday laws without specifying its content. The German military cemetery in Ysselsteyn (L) also hosts the annual Volkstrauertag commemoration ceremony; due to the coronapandemic, the commemoration ceremony was cancelled for 2020, but resumed in 2021, however, this time in a private gathering.

After a word of welcome from Dr Cyrill Nunn (Ambassador of the Federal Republic of Germany in The Hague), Mr Piet Hein Donner (President of the Oorlogsgravenstichting), Mr Lucas Winants (Mayor of Venray), Mr Thomas Kutschaty (Chairman of the Volksbund Deutsche Kriegsgräberfürsorge e.V. Landesverband Nordrhein-Westfalen), Mr René Maessen (Vicar General of the Roermond Diocese) and Mr Binyomin Jacobs (Chief Rabbi) spoke a few words of remembrance. The ceremony was supplemented by music from the wind band of the Karl Kisters Realschule in Kleve-Kellen and mezzo-soprano Emma Brown.

The commemoration ceremony of 2021 was special because Chief Rabbi Binyomin Jacobs had been criticised for describing the cemetery as follows a year earlier: “That cemetery in Ysselsteyn is a collection box of SS scum, Dutch SD fighters and collaborators.”

The Chief Rabbi was visibly emotional during his speech in which he made it clear that he cannot forgive the people who murdered his family.