Documentary after 70 years of liberation

We are proud to have contributed to this special documentary after 70 years of liberation “Om nooit te vergeten“ from foundation Pelicula film & tv. In this documentary, among other things, additional information about a Dutchman in German service as well as an English soldier who fell during the liberation of Deurne, 24 September 1944.

Personal stories from the liberation period
This documentary by Stichting Pelicula portrays a number of personal stories that took place in the period from September 1944. At that time the Allies made an attempt to liberate the Netherlands in the context of “Operation Market Garden”.

The search for a son of a Dutch SS man after his fallen father and the search of a daughter from an English tank-driver to her fallen father, create a double dramatic line with which the different stories are intertwined into a flowing whole.

The documentary premiered on the Day of the Brabant Folk Culture, organized on 11 November 2014 by Erfgoed Brabant. The documentary will now be distributed, starting in Brabant, but the makers hope that the film will also have an interest in the rest of the Netherlands.

The individual stories, both those that have been incorporated in the documentary and that the final assembly will ultimately not be achieved, will also be brought to the attention in an appropriate manner. 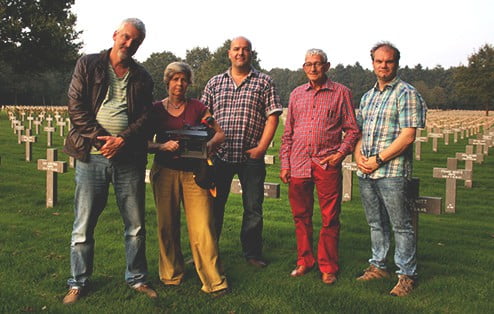