The legend, the baby and the father 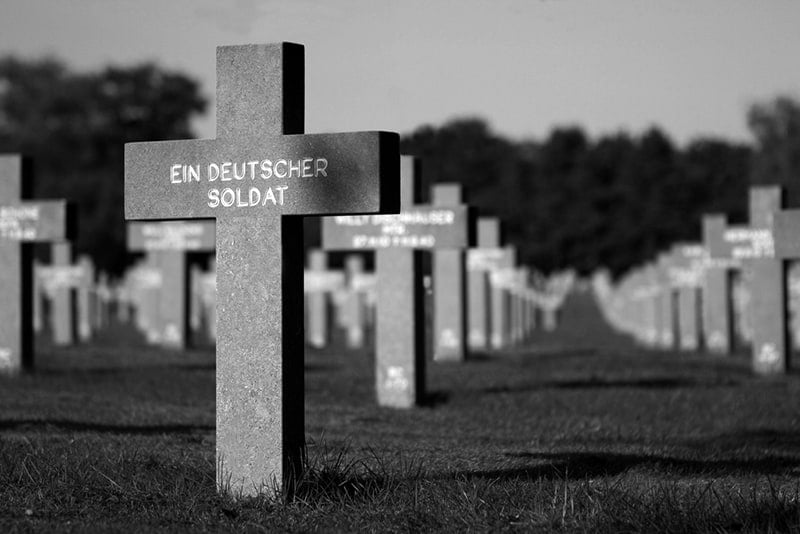 What is the story behind the gray, granite crosses? Fred and Richard want to answer that question. Because the crosses are on the German military cemetery in Ysselsteyn, they are even suspect.

After his leave, the German sergeant said goodbye to his fiancé with the feeling that he would not see her again. His feeling was right. The 28-year-old Heinz Meding was killed in the Netherlands on 20 October 1944. His future wife did not dare to visit the grave in Ysselsteyn because of the intense emotion that could bring about this. Fred put the photo of the cross on Find a grave, a website with graves of known and unknown persons. One Christmas at the end of 2016 commented: ‘Rest in peace.’ Many surviving relatives of German soldiers who fell in the Second World War do not know where their loved ones have their final resting place. Especially when they lost their lives abroad. Thanks to Fred’s efforts many deceased people are still found. Fred had to move more on doctor’s advice. He went cycling and came during one of his trips along the German military cemetery in Ysselsteyn. He walked onto the grounds and became curious about the story behind the dead. In ten years he photographed all, almost 32,000 graves. He published it on Find a grave and provided additional information.

During one of his visits Fred saw “a woman with an expensive fur coat” standing by a grave, she commemorated her father Heinrich Kramm, Fred deepened in Kramm, who breathed his last breath in 1941, and found out that Heinrich was the father of Heinz. -Georg Kramm, better known as Heino, the German schlager singer with the blonde hair and the dark sunglasses.Fat also noted the tragic story about Ernst Grähwe.The host, stationed in Deventer, lost his son Udo on 9 April 1945 by pneumonia. A day later he refused to be part of the firing squad that had to fusillize five members of the resistance, he was killed, he was shot by his commander 45 minutes later, the Canadians liberated Deventer, and Fred did not want to have a surname and place in the newspaper because He is afraid of negative reactions: anyone who shows interest in German soldiers is quickly declared a mistake, labeled neo-Nazi, and he emphasizes that he does not accept these “reprehensible ideas.” nhangt “and that he does not want to glorify the war. Fred only wants to give the fallen soldiers and civilians a face. As happens in Margraten with American soldiers. Of course Germany was the aggressor, the enemy. And in Ysselsteyn there are soldiers who were “terrible criminals”. But many soldiers who remained behind on the battlefield were nothing more than cannon fodder. Victims who left behind women and children.

Fred is not the only one with this “strange hobby” There are many, like Richard Schoutissen (47) Born in Swalmen, living in Deurne, for decades researching war victims, especially “dead Germans and wrong Dutchmen”. They lie next to each other in Ysselsteyn. Such as Willem Heubel, the first Dutchman who voluntarily joined the Waffen-SS. Heubel brought his sister Florrie in contact with NSB foreman Meinoud Rost van Tonningen, with whom she married. After his death, Florrie became known as the Black Widow. Heubel fought in Russia and received the Iron Cross. Fred: “Fresh flowers regularly lie on the grave.” Schoutissen must always be accountable for his “wrong hobby”, which arose from his interest in the war. “In addition, I have a bald head. But I do not collect weapons or distinctions, I only have eight terabytes of archives, “says the ammunist historian, who reports on his investigations for war victims, for which he spends archives at home and abroad. who would have been a resistance man and buried in Ysselsteyn, he already knows that the chances are that the family member was not a hero but a collaborator, sometimes people come to his door with remains that were excavated after a metal detector had responded to a helmet.

Fred says that Ysselsteyn is a legendary pilot: Heinz Wodarczyck. He escorted Josef ‘Pips’ Priller in the counterattack on D-Day. Prilers squadron was sent to Normandy although it consisted of only two planes. Priler and Wodarczyck nevertheless made hundreds of victims. It was the only German air raid on the Allies on 6 June 1944. The action can be seen in the film The Longest Day. Wodarczyck was shot down above the Netherlands in 1945 by the German air defense. Fred draws attention to Karl-Heinz Rosch. During an Allied bombardment in 1944, these two young Dutch children rescued in Goirle. After he had brought them to safety, he was mortally hit by a grenade. Three days after his eighteenth birthday. In 2008, a monument to Rosch was established in Goirle.

Intriguing is the grave of Anthonius Simons.’3.4.45 † 3.4.45 ‘, reports the cross. A baby on a war cemetery. It is the son of Johanna Maria Simons, according to Fred “The father is possibly a German. The child was stillborn in Camp Vught, where after the war also the wrong Dutch were held prisoner. After their death they were often reburied in Ysselsteyn. “It is also this” raw reality “that Fred and Richard want to show. A reality that is hidden behind thousands of crosses. Some stories will never be told, however, because it is unknown who is in a grave. 4882 in total. According to the duo, some soldiers are aware. unknown. “It concerns hotshots that exert too much attraction to neo-Nazis. You do not want that. “Karl-Heinz Voigt, administrator of the cemetery:” I can not establish that, nor deny it. “

The German military cemetery in Ysselsteyn (municipality of Venray) is the largest military cemetery in the Netherlands with almost 32,000 deaths. It is also the only German military cemetery in the Netherlands. There are mainly German soldiers who fell in the Netherlands during the Second World War. The cemetery was constructed in 1946 by the Dutch government. In the 28-hectare, hilly heathland area, not only Germans have found their final resting place, but also Dutch, Polish and Russians who have fought as a volunteer with the German forces. Men, women and children who died in Camp Vught were also buried in Ysselsteyn. ‘Vught’ acted as an internment camp after the liberation. There were thousands of Dutch people who were suspected of collaborating. Finally, 87 Germans from the First World War died in Ysselsteyn. The cemetery consists of 117 blocks with usually 12 rows of 12 or 25 graves. The gray crosses are made of granite. In 1976 the cemetery was handed over to the German digging association.

Gladly, but with respect

“We welcome the fact that people are doing research in the cemetery,” says Karl-Heinz Voigt, administrator of the German military cemetery. “If the new visitor center is there, we will encourage it even more. staff to conduct in-depth research ourselves, we work together with the universities in Nijmegen, Tilburg and Cologne and with official bodies such as the Salvage and Identification Service of the Royal Netherlands Army, as well as with private individuals such as Richard Schoutissen. realize that there is a person behind every stone. ” Voigt adds a ‘but’ to it. He says that he has to respect the Personal Data Protection Act. He also considers it important that the research be conducted with respect for the deceased and the relatives. He gives as an example that relatives of people who are buried in Ysselsteyn are approached by people who falsely issue for employees of the cemetery. “We do not want to cooperate with such people. In fact, if that happens again, we are considering legal steps. “He thinks it is inconsistent if people, like Fred in the article above, unsolicited put all kinds of information about others on the Internet and want to remain anonymous themselves. that Fred is trying to draw attention over the back of a famous survivor (Heino).