The gentelman’s camp near Deurne

The drawing below “The gentelman’s camp near Deurne” (60×45), was made by Herman van den Bosch. Herman was mobilized in 1939 to defend the fatherland, managed to stay out of the enemy during the German advance and fled to England after the capitulation in May 1940. For most Dutch soldiers, the stay in England was a time full of contradictions. Evenings alternately spent in pubs, where Herman painted in exchange for a pint, as well as chicken coops and other shelters if a German air raid was to be survived. But above all the burning desire for peace, which means going back home, where his fiancé was waiting for him.

When the Reinforcement Unit finally set foot on the mainland aboard the Libertyship “Ocean Angel” (D-day had been behind us for some time), the double feeling never ceased. The Reinforcement Unit formed the reserve of the Princess Irene Brigade, in order to supplement the Brigade’s losses. On September 24, 1944 (on this day Deurne was liberated) they crossed the Belgian-Dutch border and marched on to the south-west of Nijmegen. Yes, he was back in the Netherlands, but he was still far from home, even though that his house had already been liberated with the rest of the South Netherlands. In addition, there was heavy fighting at the front. Not always, sometimes just like in England a beer could be drunk in the local cafe, but then suddenly the bullets fell from the sky and everyone had to save their lives. Such as the advance to Deurne where they were delayed in the vicinity of Sint Anthonis by German actions at Overloon, but in the end they managed to make bivouac the next day in Camp Vreekwijk.

During his stay in Camp Vreekwijk (the current boarding school Vreekwijk), at the time the NAD camp (Dutch Labor Service) Vreekwijk, Herman van den Bosch made the drawing, with the playful text; tonight you can drink a beer in “the traveling man” until 9 o’clock, with collar and tie.

When the war ended, his fiancé came to pick him up, despite the joy of seeing her again, she found a mentally ill man. The word post-traumatic stress syndrome did not yet exist and neither did its treatment. The cheerful Amsterdam bon-vivant had a hard time grounding and the hundreds of drawings he made in the period 1945 – 1950 show his cynicism towards society, which was only too happy to look to the future and the veterans – that word also existed not yet – searching and left wandering. But drawing was also a form of therapy, which is clearly visible in his work from the post-war period.

Anyone interested in the work that Herman van den Bosch made during and just after the Second World War will visit www.hermanvandenbosch.nl, the website where all his work can be found. Then click (top right) on “zalen (rooms) and go to ‘De tweede Wereldoorlog; een traan en een lach’ (The second World War; a tear and a smile). 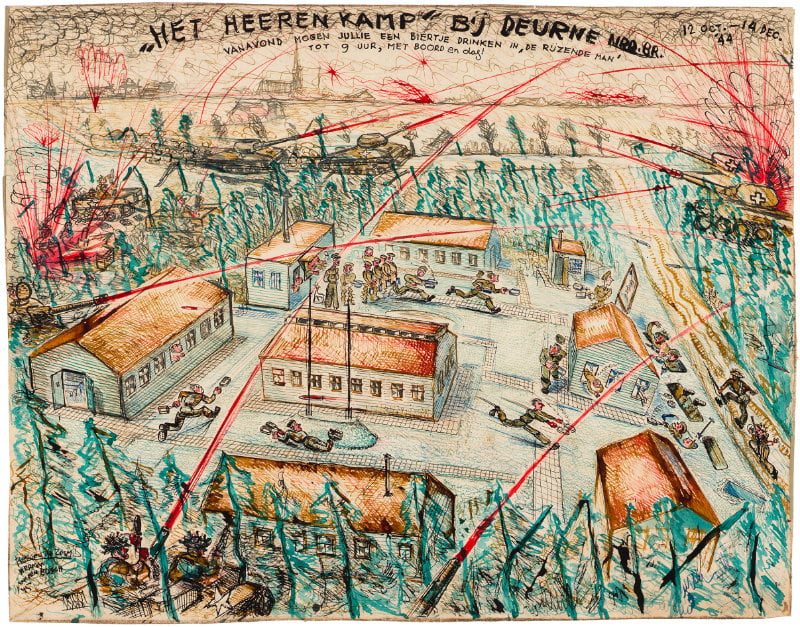