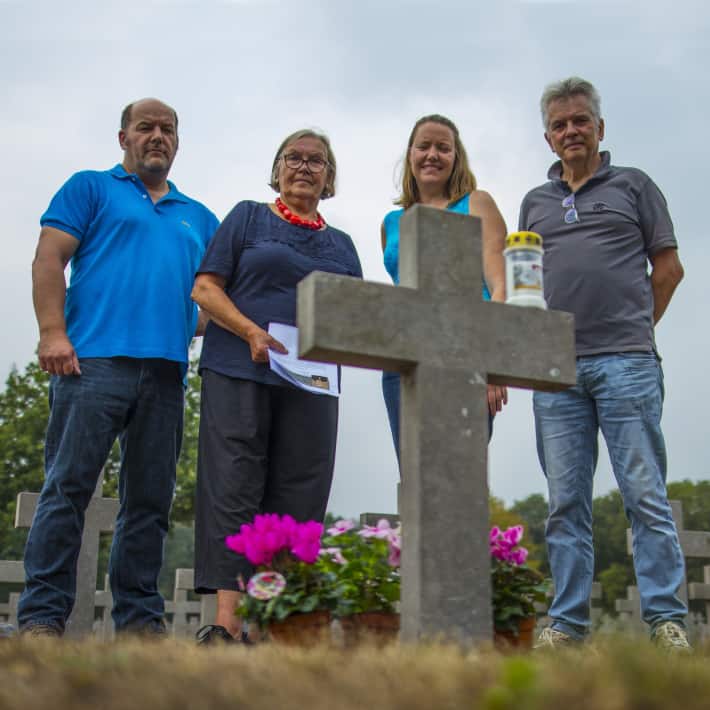 Fred van den Munckhof would be a good journalist; he is extremely curious, eagerly searches for stories behind people and writes them down. In this case, those people are the 31,600, mainly German war victims who are buried in Ysselsteyn. He photographed the thousands of crosses on the graves on Timmermansweg ten years ago, put them on www.findagrave.com and waited patiently for reactions. They came to hundreds.

Last week Barbara Plechaty and daughter Dorothy came from America to Ysselsteyn for a visit to the grave of father and grandfather Kurt Kiecker. On the internet they had encountered the grave cross (put on the site by Van den Munckhof) of their fallen family member.

Fred van den Munckhof personally picked up mother and daughter last week at the station in Deurne to take them to the German military cemetery in Ysselsteyn. “They come from New York and are in Europe for a holiday and family visit in Germany Before they went on a trip, Dorothy looked around the internet and found the grave cross of her grandfather Kurt Kiecker on Findagrave.com. their holiday to Ysselsteyn and contacted me. “Mother Barbara (1937) was at the grave of her father 48 years ago, and she lived on the assumption that his grave would no longer exist after all these years. She also lost sight of Europe, she had already arrived in New York after the war, went back to Germany, where she could not find her turn anymore, and then returned to America, where she met a Czech man. , married and had two children Barbara was the only child of Kurt Kiecker (1908) who worked as a waiter in Danzig (Gdansk) As a German military soldier he had to go to war, was killed on September 19, 1944 in Best, was buried there,after which he got a place in Ysselsteyn in 1947.
. 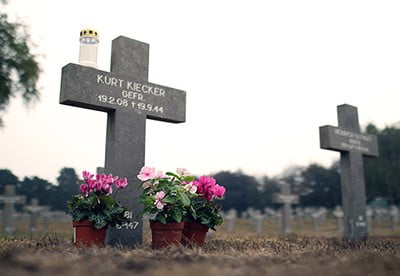 For ten years the Kiecker family remained ignorant of the fate of Kurt. That, according to van den Munckhof, had an enormous impact on the Kiecker family, of which the widow has never remarried. Dorothy says it is important to find that she was at her grandfather’s grave. “I have always been interested in our family history. We never knew where Grandpa had exactly died. We have heard that from Fred. Ten years after his death, he was identified by his teeth. My mother often tells about the war she was experiencing as a child. Unfortunately she does not know much about her father. I was surprised and amazed that someone, Fred, had taken the trouble to put all graves with crosses on the internet. I would like to return to Ysselsteyn once to learn more about the area. I think my brother will then go along. “These are the stories that van den Munckhof wants to record. “There are thousands of people there, each with their own story. I’m curious about that. Most of them were ordinary wishes that were forced to go to war. The stories behind it are sometimes poignant. Of course, there are pure criminals in Ysselsteyn, among whom some Dutch people who were really wrong. You are very careful about that. You do not want to be a platform for people with wrong ideas. If Ysselsteyn had been a British or American cemetery, I would have done the same. In Venray and Overloon are war cemeteries with mainly British soldiers. I have also put those on findagrave.com. “
. 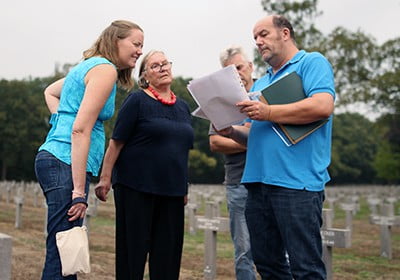 Van den Munckhof works a lot with Richard Schoutissen from Deurne who does a lot of research into fallen German soldiers (www.oorlogsslachtoffers.nl). The Venraynaar emphasizes once again that he has absolutely no sympathies for Nazi Germany. How did Van den Munckhof come to his unusual hobby? “When digging at my father-in-law in Overloon, I found long ago the remains of a soldier, a helmet with a card in it.

At that time, relics were regularly found in Overloon. That intrigued me. Those victims are people like me, I thought. Had a home, family and then find death far from home in a gruesome way. Nobody ever hears anything from them. I got triggered by that.”

‘If there was an English cemetery in Ysselsteyn, I would have done exactly the same’

Ten years ago, when he happened to visit the war cemetery in Ysselsteyn, he decided to do something with it. “I had to move a bit more from the boxtower and bought a bike. On one occasion I passed the cemetery in Ysselsteyn and got off to take some rest and read all those names on the crosses. It did not let me go. Were those people really that bad? At that time I also discovered the site findagrave.com and created a personal account. I put all the crosses with the names of Ysselsteyn on it.”

The intention of the site is to give deceased people, and not only soldiers, a place on them. There are now about 63 million names. Relatives can leave their reactions there. To date, van den Munckhof received around five hundred from around the world. Eleven times the contact led to a visit to the Ysselsteynse cemetery. Van den Munckhof only throws a sting, does not actively search for relatives. “The reaction must come from one side. Sometimes they are less fun. Like someone from America who was very angry because she thought we were disturbing graves, “Leave them alone,” she wrote. Have explained to her how I exactly work.”