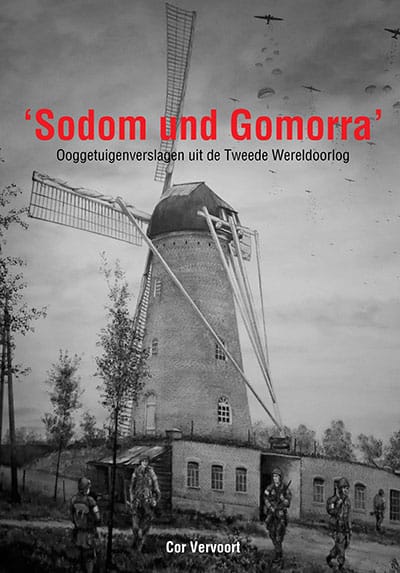 In October of the year 2017 Cor Vervoort, author of the above book, contacted me with the request for support in the search for further information about German soldiers who died in the battles for ‘Hell’s Highway’ in the period September 24-26 1944 in the municipality of Veghel. It is a sad story, one of the soldiers was called Leo, whose body was found near a damaged Renault R35 infantry tank with a photograph of a young blond woman in his hand. This photo was written: Liebe Leo Ewige Erinnerung Deine Lise.

The photo was found by the victim by Leo van Dijk, coincidentally the same name as the German soldier. In the immediate vicinity were two German soldiers who probably also died when they left the damaged infantry tank. The victims were buried at the time by farmers from the area, on the land of Cor Vervoort’s grandfather.

Since the German military cemetery in Ysselsteyn and the Volksbund Deutsche Kriegsgräberfürsorge e.V. in Kassel (this German organization maintains graves of German war victims outside of Germany) could not answer Cor’s questions about these German soldiers, he came to me via-via. After a search in my archive, I found out the names, the final resting place as well as further additional information about these German victims and after a fascinating search I finally came into contact with a few surviving relatives. These surviving relatives were still in possession of a few photos which at a later stage told a separate story and that did not go unnoticed in the network of researchers who are involved in this subject.

Nice to have been involved, even if only for a small part, with this fantastic book ‘Sodom und Gomorra’…

After my call in the MooiRooiKrant of 9 December 2017 for information about an American parachutist, Donald Oliver Mills, who landed on the border of the Koevering and the Kuilen (Eerde) on October 20, 1943, it finally happened. My book with the title ‘Sodom und Gomorra’ with also the story of Donald Oliver Mills is published. This partly with a view to the commemoration in September 2019 of Operation Market Garden, then 75 years ago.

From an early age I was fascinated by the stories my mother, Anna van Erp, told about the war. Slowly but surely I came up with the idea to write a book about this. The stories must be preserved for the generations after us. The madness and horrors of a war must never be forgotten.

The memories of my mother have been supplemented by the stories of seven still living eyewitnesses of yesteryear, who lived during the war on the Koevering, Willibrordushoek and de Kuilen. It would be a forever missed opportunity not to record these stories, because time is beginning to dawn. In addition, I received help and valuable advice from many people from the World War II circuit. Partly because of their indispensable help, the book has become what it is now, a true time document with a number of stories and photographs that have never been published.

In particular, the eyewitness accounts make a fascinating story and give a complete picture of the period 1940 – 1945. The book is divided into two parts, the occupation years and our liberation.

The eyewitnesses tell about the (survive) life during the period of the German occupation. A period in which everyone was afraid, nevertheless, people who fled the occupation were in the small community that Eerde had been taken care of.

Much attention is paid to Donald Oliver Mills, an American crew member of a shot B-17, who managed to escape under the eyes of the Germans in an equally spectacular and miraculous manner and returned safely to England a few months later via Gibraltar.

The largest part of the book is devoted to the air landings in September 1944 at Son, Eerde and Heeswijk-Dinther and to the fighting around the corridor shortly thereafter.

On September 17, 1944 Eerde became the first place in the Netherlands, during Operation Market Garden liberated. The initial euphoria, however, was short-lived. The following week shortly after the Allied ground army came through, a fierce battle broke out around Hell’s Highway between Sint-Oedenrode and Veghel.

In particular the story of the breakthrough of the Corridor, Hell’s Highway, supported by a Regiment German Fallschirmjäger by a number of Jagdpanzers at the Koevering, the current Veghelseweg, on 24 and 25 September 1944 always made a deep impression on me.

My father and mother witnessed this breakthrough very closely when, together with a number of other relatives and local residents, they spent more than 40 hours in two improvised shelters on the Willibrordus corner, exactly where the Germans cut the Corridor.

They thought they were safe by looking for a place to stay near the main road, the lifeline of the Allies. The reality, however, was different.

After a large English convoy was set on fire that afternoon, a few hundred meters from their shelter, they quickly became aware of the dangers on that particular Sunday. Unfortunately it was too late, flights could not be done anymore. Passing the Veghelseweg under those circumstances to move in the direction of Zijtaart was equivalent to suicide. The wrong time in the wrong place. The war was burning in full force and they had no idea what was going on.

Forty hours of mortal fear in a shallow, wet hole, without food or drink, surviving on hope and fear the residents fell. There was nothing left but to pray rosary hats. Germans and Americans were killed around their air raiders. German tanks drove past the shelters, mortal fears, the deafening noise of exploding grenades and almost all the farms in the area burned down, with household effects and cattle being lost.

One of the eyewitnesses told me: ֦ The actual war lasted for us two weeks, but I can tell two months. “Another said: ֦ If there is a hell, I know what it looks like there. In hell it can not be worse than what we have experienced.”

The story of the American paratroopers of the 501st PIR, who on 24 September 1944 in Eerde and the Eerdse Zandduinen fought with their light armament as lions against a huge German force, to prevent them from crossing to Hell’s Highway.

There are also the stories of the American paratroopers of the 506th PIR, who, like their colleagues from the 501st PIR, belonged to the 101st Airborne Division and the British tank crews of the 44th Royal Tank Regiment, who retook the Corridor in the late afternoon of September 25th. on the Germans.

And the story of the English infantry, the Cameron Highlanders, who started the liberation of Schijndel in the night of 22 to 23 October 1944 from the Koevering. They suffered heavy losses before they reached the Schijndel border.

The battles around the Koevering, Willibrordushoek and de Kuilen have killed several hundred soldiers, both allies and Germans. The struggle among the civilian population also took its toll, many had to make completely unexpected flights while leaving behind their homes and possessions. Terror and despair, several victims were deplored.

Most Dutch people do not know that the German breakthrough of the Veghelseweg was the death blow for the success of Operation Market Garden. The English paratroopers who had landed at Arnhem could not be supplied and provided with reinforcements. Because of the German breakthrough, militarily a feat, the aid came too late and Market Garden turned out to be a dramatic miscalculation of the Allies, who unnecessarily cost many lives. “A bridge too far.” The indirect result was that the Netherlands could only be liberated above the major rivers after the following winter. The ‘hungry winter’ was the result, 20,000 Dutch people who did not survive.

Furthermore, the story of a Dutch soldier, Matthijs van Gorp, who went ashore on Sword Beach in Normandy in the service of the Princess Irene Brigade. And probably as the first Dutch military, as a scout in a combat vehicle (Recce) in support of the British soil army, the border at Valkenswaard and Hell’s Highway passed on the way to Arnhem.

Also the sad story of a German archer, Hans Knoop, of a Panther tank of Pz.Abt 2107, who did not survive the battles at the blockade of Hell’s Highway and was mysteriously killed.

Then finally the perhaps strange and perhaps frightening title of the book ‘Sodom und Gomorra’. The two cities from the Hebrew Bible, which were destroyed by God through fire. It is the cry for help of a German Fallschirmjäger on September 25, 1944, that my father Bert Vervoort came across at the burning farm of the Erp family. He had gone out of the shelter with two others to see if there was anything left to save. Despite all kinds of precautions, everything was lost. All but one of the farms on the Willibrordushoek were on fire at that moment.

My book is not about friends or enemies, people are central. People like you and me, who are dragged into the madness of war. ‘We should never forget them’

The book is in A4 format, 192 pages heavy glossy paper, full-color, with many unique photos and documents, hardcover.

The book is for sale at the Eerdse Molen in Eerde (Veghel) and at the Museum ‘Wings of Liberation’ in Best.