Search for the crash site of Captain James D. Stevens 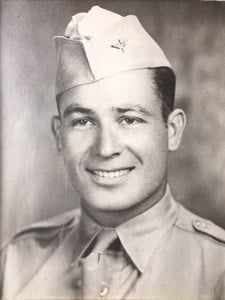 Almost 3 years later, the working group still exists, albeit in a slimmed-down capacity.

This is not to say that we have been idle.

Some time ago we made an appeal via the regional press to people who could remember something about a suspected crash of an American fighter on March 20, 1945 near Holthees.

Three witnesses reported to our question; Mr. Sra Wijnhoven and brothers Tjeu and Jos Ermers. The latter two come from Holthees, and Sra from Smakt.

Sra, who hopes to turn 90 in December, was 15 years old when he stood in the garden of the family home, near the Loobeek. He remembers as yesterday, when he looked up, he saw an airplane whirl from the sky in a spiral flight, straight down. A day later, Sra went to the remains of the plane with a knife to try to cut a piece out of the tires so that the shoes could be soled. This did not work, the knife was too blunt.

This man of almost 90 years put our working group back on the right track. He knew approximately where the plane had crashed and that after more than 75 years. Even made a sketch, which almost corresponds to the current reality. He was more than 100% convinced that it was a “fighter”. Sra remembers that his family returned home first, after a long evacuation, in early March 1945.

Later we were approached by Jos Ermers, whose family lived near the chapel of Holthees at the time. Decades ago, he spent a lot of time with the steward of several farms in Holthees and the surrounding area, Harrie Havens. This also applies to his older brother Tjeu. He remembers that as a child, they were regularly digging in the place in question. Found ammunition and other pieces of metal. Tjeu also remembered the place quite well.

In our previous investigation, conducted by Planehunters Recovery Team (Joop Hendrix and Sjaak de Veth), 2 crashes near the Knol farm (Wellington bomber) and the Lijnbraak farm (Halifax bomber) were found and confirmed and were therefore included in our book. Captain Stevens’ crash could never be found and confirmed.

The big news
Thanks to the witness statements by the brothers Ermers and Mr Wijnhoven, the search area has been drastically reduced. What seemed almost impossible became true. Captain Stevens crashed his P51 Mustang type D (or K) on March 20, 1945, less than 60 meters away where a Wellington III bomber crashed earlier on May 31, 1942. In the initial investigation, the investigation team assumed that all found parts belonged to the Wellington. No specific parts were found at the time that pointed to a crash other than the Wellington.

Nothing is less true! Meanwhile (Monday, July 13, 2020), parts that belong to a P51 Mustang have been salvaged at the recently found crash site. This can be deduced from the part codes belonging to a Mustang. The PlaneHunters Recovery team, for this investigation, enlisted the help of the cousins Grubben (Peter and Peter) who did the research with their equipment.

These parts, too, will be housed in the Museum van Postzegel tot Tank. (photo: Joop Hendrix)

Captain James D. Stevens, after having his first field grave next to the accident, is buried in Margraten. The body was transferred to Margraten on April 1, 1945. His grave was adopted a few decades ago by Herman van Hemert, who has also been in contact with the Stevens family for years.

They never knew where their son and brother from Fayetteville, Tennessee (USA) died. Now that is known and they may be able to cope better with the loss of their loved one.

You can read the complete story and find more photos on the Facebook page “Air War Boxmeer 40/45” : https://www.facebook.com/luchtoorlogboxmeer4045/
.

Just before the publication of this press release, we received the sad news that Sra Wijnhoven passed away on Monday July 13, 2020. Exactly the date that the first parts of the Mustang were found! In him we lose a reliable, honest and amiable man. We have not doubted for a moment the accuracy of his witness report. Thank you Sra, we would NEVER have found this plane without you.

May he rest in peace..