Raid at the Cadre School in Deurne

Quite soon in 1940, “Huize De Romein” was demanded by the occupying forces to serve as a cadre school for the NSB (National Socialist Movement, see also (Anton Mussert opens cadre school Deurne). A W.A  (Resistance Department) and N.J.S. (National Youth Storm) cadre school came. A Dutch Youth Movement following the example of the German Hitlerjugend and a resilience department where young men received their training in National Socialist teachings.

The presence of the cadre school such as the weekly marches of its members through the center of Deurne caused much annoyance for the people off Deurne. On October 26, 1940, a group of at least 23 people, young and old, decided to “teach the NSB members present in the cadre school” by throwing some stones in the direction of the cadre school, including 4 stained-glass windows lead windows were destroyed. Shocked by the clink of glass, Mathieu Hubert Prevo, commander of the cadre school, like a few other NSB members present, immediately went outside to take a look, where they saw some suspects in the yard of “Huize De Romein” and a large number of suspects in the public road that quickly ran off after seeing these so-called “Black Soldiers”

When the commander of the cadre school went to get a story from the mayor, he told that he was told that that day in the center of Deurne, problems or irregularities were to be expected, as a result of which he had ordered the police to stay in the center, far from the frame school. Whether these rumors were spread by the suspects in order to create a diversion to raid the cadre school is unfortunately unknown. 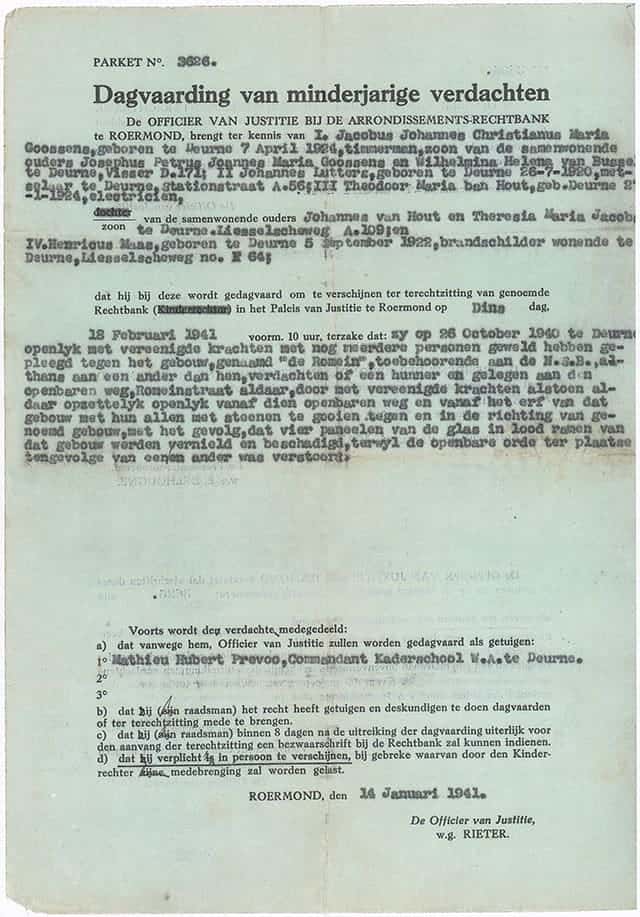 With the exception of Jacobus Johannes Christianus Maria Goossens, Johannes Lutters, Theodoor Maria van Hout and Henricus Maas, the remaining 19 suspects were not prosecuted for lack of evidence. On January 14, 1941, the four suspects were summoned to appear at the court hearing in the Palace of Justice in Roermond on Tuesday, February 18, 1941.

During the trial, not only was the destruction of the 4 stained glass windows charged, but also an attempt at arson, Mathieu Hubert Prevo, (commander of the cadre school) had stated that while throwing stones on the other side of the frame school the attack was started with an arson attempt. Goossens and van Hout were assisted by their counsel Mr. P. Trippels, lawyer in Roermond, Lutters and Maas, conducted their own defense. The four suspects were eventually found guilty of destroying the 4 stained glass windows, because the arson could not be proven legally and convincingly, the four were acquitted for that. The four culprits were sentenced to (in order of the suspect number obtained):

Later in Deurne it was circulated that a fine of NLG 800.00 was demanded and paid by the resistance, in person from Hub van Doorne. Since the average weekly wage for a skilled worker at the time was approximately NLG 35.00 and the damage was ‘only’ 4 stained glass windows, this story was possibly made public to place people on a pedestal. On the other hand, this benefactor might also have paid the fines of fl. 40.00, but the latter are just thoughts that are not based on research.

Complete file may be available for inspection from the author. 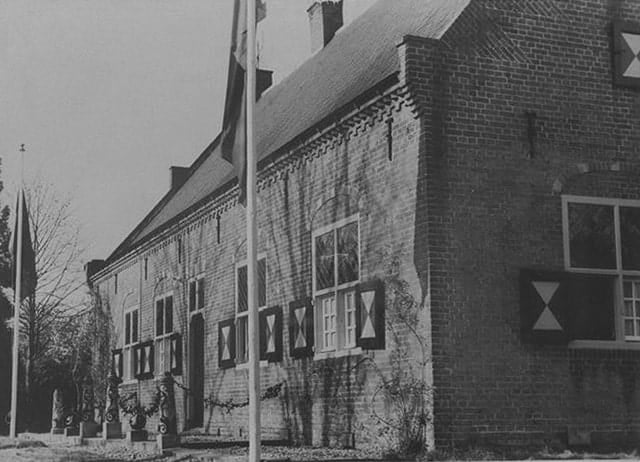 < Kompaan Veenstra of the National Youth Storm in one of the rooms in “Huize De Romein”, the stained glass clearly visible.