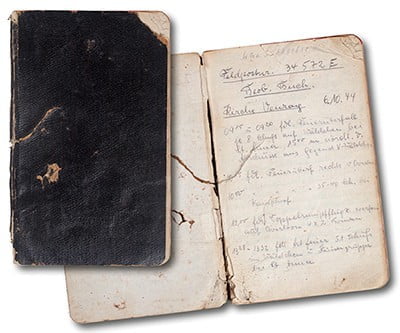 After the Carillon Venray Foundation decided to take over the layout of the Grote Kerk van Venray, after the redevelopment of the first and second turret rooms, the “Werkgroep Inrichting Toren” (Workgroup Building Tower) started to furnish the third tower room of the Sint Petrus Banden Church in Venray. For the third tower room a German “Beobachtungsbuch” (observation book) would be shown as a special sight. It concerns an observation book of a German unit that during the Battle of Overloon and the liberation of Venray had set up a observatory in the tower of the above-mentioned church.
The observation booklet is special because it is from minute to minute, by means of short notes, describes what the German observers had observed from their vantage point during the period from 6 to 13 October 1944, observations that were mainly of interest to German artillery units that could attack the Allies in a targeted manner.

The observation booklet, with the notes of, for example, combat observations, as well as the names of the observers and their duty roster, was saved not much later from under the rubble of the blown-up tower of the Saint Peter’s Church. The original booklet, which was in private possession, was made available by the owner to the “Working Structure Tower” of the Carillon Venray Foundation to make an exhibition in the third tower room of the Sint Petrus Banden Church possible. In January of this year, Harrie Eijssen (member of the “Working Group Equipment Tower”) contacted me if I would like to support this working group to find out the German unit, preferably the observers of this unit, during the Battle of Overloon. and the liberation of Venray had arranged a lookout post in the church tower and had kept the observation booklet. Of course I was happy to accept that assignment.

After that I continued my search by consulting the lists of missing German soldiers, unfortunately these lists were not sorted by place but by unit so that this search was an extensive investigation as there are already more than 2,500 German soldiers in anonymous graves in the Netherlands alone. Unfortunately, however, in this search, I was completely stuck, so I went to consult the names of the soldiers who died in Germany, even here there was ‘only’ one name that also i.c.m. his rank corresponded to a name / rank from the book. This concerned a German soldier, son of an innkeeper, who was killed on a train on Easter Sunday, April 1, 1945, and was buried in a mass grave with the other victims of this shelling. Meanwhile, there is contact with the municipality of his place of residence, but here too the information remains brief and I have also continued this research in Berlin.

Since a reply from Berlin can wait for some time, I am also looking in the ‘Bundesarchiv’ in Freiburg, but here too, it is difficult to find specific information with little information available. In the near future, however, I hope to be able to share more background information about the booklet with the “Working Group Furnishing Tower” of the Carillon Venray Foundation.

The tower rooms of Sint Petrus Banden Church in Venray with its diversity of exhibitions can be visited on Saturdays from 2 pm to 4 pm to 29 October.

Tableau, enlargement of the ‘Beobachtungsbuch’. 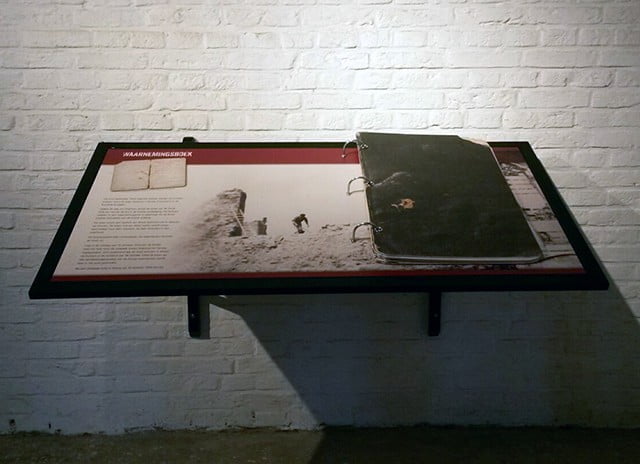