After an almost impossible search of more than 18 months, we finally managed to trace some German soldiers from the Beobachtungsbuch or observation book which was saved under the rubble of the inflated tower of the Saint Peter Banden Church. In this book were the notes of combat observations as well as the names of the observers and their duty roster. This search was commissioned by the “Working Group Furnishing Tower” of the Carillon Venray Foundation, which exhibits the observation book in one of the tower rooms of the Sint Petrus Banden Church in Venray. The observation book is special because it is here from minute to minute, by means of short notes, describes what the German observers had observed from their vantage point during the period from 6 to 13 October 1944, observations that were mainly of interest to German artillery units that could attack the Allies in a targeted manner. Soon the church tower of Venray became an important target for the allied land and air forces and should, in any case, be eliminated. Although the church tower was bombed from the air and the land, it was eventually the retreating Germans who blew up the church tower on 16 October 1944, in order to prevent the Allies from using the church tower again as a lookout. The observation book was not saved much later from under the rubble of the inflated tower of the Saint Peter’s Church.

As can be seen from the photo above, the observers were only able to read a rank and surname, unfortunately an added field post number was not registered, as according to the archives this was last used by a unit last stationed in Latvia . In fact, the conscious field mail number had been used for the last time in October of 1943 by this unit. It took a lot of effort to finally trace the right people, but after many hours spent in various German archives, some names were found in the book. By better investigating to the most ‘unusual’, therefore least common, surname, several other surnames were found in the same unit. Since all of these survived the war, I found the names under the Artillerie Regiment 880 which, after the liberation of Venray, was erected on 31 October 1944 in Lower Rhine in Germany.

After investigating the rank and surname of the German soldier, Kan. Johler (Kanonier Kannonier Johler), so it was at least mentioned in the booklet on 10.10.1944 when this at 24: 00h his fellow observer (Gefreiter Wacker) redeemed in the tower seemed to be Kanonier Roland Johler, born 21-6- 1926 in Morsum. Roland Johler was assigned to the 13. Batterie Artillerie-Regiment (motorisiert) 880 on 16-11-1944. His name also appears on a discharge list (26-08-1947) of a prisoner of war camp, 891. German Labor Service Group PW-Dienstgruppe, in Friedrichsruh-Sachsenwald (east of Hamburg) in the British occupation area where he was employed in forestry. With this information I finally came into contact with Ekkehard Lauritzen, a cousin of Roland Johler, who presents his family history online at the site: http://www.lauritzen-hamburg.de. 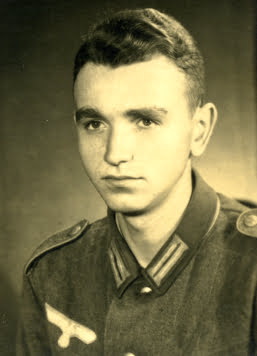 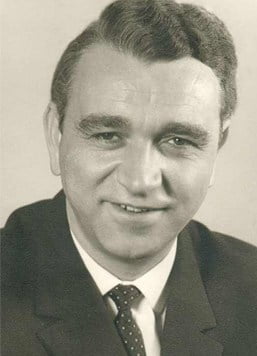 Ekkehard Lauritzen reacted positively and could tell the following about his uncle: Roland Johler was admitted to the Wehrmacht in 1944, at the age of 17, where he received a six-week basic training. In the summer of 1944 he was transferred to the Netherlands, but because Roland was rather reluctant about the war, little is known about what he experienced during that period. However, there is one experience Roland told several times, during the war he was in a church in the Netherlands which was on fire and because he was the son of a minister he felt he had to save this church and tried to convince his comrades in vain to help him with extinguishing. Roland said, “I have no choice but to keep up with him.” Roman Johler, the son of Roland, added that his father worked as a “Funker” radio operator on church towers for the transmission of coordinates. of enemy targets to the German Artillery through observation, which is why these church towers were often the target for the Allies, Roland carried a 30 kilo heavy radio transmitter on his back, but nevertheless escaped from the burning church tower, perilous because the stairs were already on fire “Several of his comrades would not have survived this,” says Roland, but whether the Venray church is meant here is not clear to the next of kin.