Italian SS volunteers on the field of honor 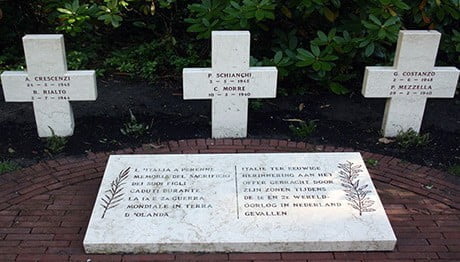 When, on the basis of our investigations into the events in Nijmegen on May 10, 1940, we tried to accredit the traces of the German soldiers, we came in contact again with Richard. A name led to further investigations. Karl Morre, who by a mistake in the lists of the funeral and reburial of the German fallen, had registered as Morze. Richard found out that this Morre actually had Italian roots and was removed and reburied by Ysselsteyn after the war. Karl Morre was born in the Italian Lucca on 24 May 1919. Before he was 19 he fell near Nijmegen on May 10, 1940, presumably as a soldier of the SS reconnaissance department.

Morre wore the dog tag “SS Aufkl.Abt. en 4./SS Germany no.19 “. The SS reconnaissance department was partly framed by the German regiment. These two things correlate well. However, it is unusual for an Italian to join the SS in May 1940. The number of foreigners in the SS was very low. In addition, she had to have a German parent, otherwise the entry into the armed forces – including the SS in 1940 – was impossible by law. Morre, who had an Italian surname (and the German first name Karl), should therefore have had a German mother.

Why are we discussing the SS member Morre here? We wondered why the tomb of Morre was evacuated on Ysselsteyn. Richard found out that at least 14 tombs of Ysselsteyn were reburied after the request of the Italian government after … the Italian department of the war cemetery Rusthof! There are also many Italian soldiers who died in German captivity. On September 8, 1943, Italy waved his jacket and turned counterclockwise. The country was suddenly allied. This meant that the Italians who fought so far for the German, suddenly became enemies of the Germans. So there were Italian prisoners in Netherlands. More specifically, they became allies and, if they died after September 8, 1943, a sacrifice of honor.

Next to them – no, between them – 14 Italians were buried, many as Wehrmacht members during the German-Italian alliance. So it can happen that SS man Karl Morre, who was killed on 10 May 1940 in the fight against the Netherlands, rests in Dutch soil as a honorary sacrifice. A bizarre case, where one can wonder why the Netherlands was involved at the time … (Allert Goossens)