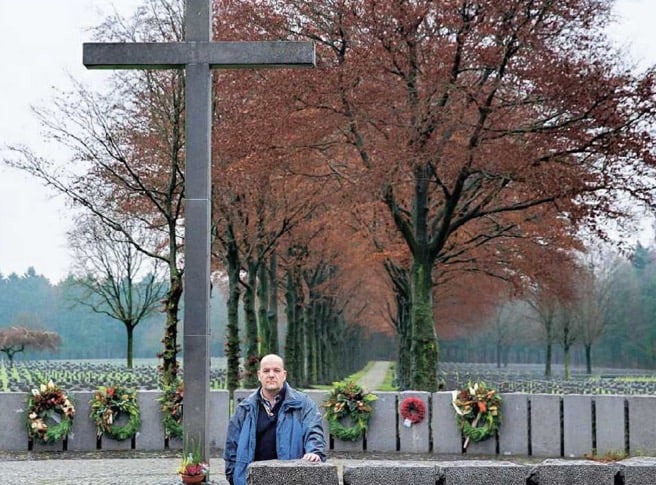 DEURNE – Requests, assignments and questions come from all angles and holes and can invade at any time of the day. Richard Schoutissen casually opens his mail by way of illustration. The last message is just inside, from the BIDKL, the Salvage and Identification Service of the Royal Netherlands Army. Through a number of official channels in Germany and the Netherlands, the service was asked by a German woman for more information about her father, a fallen soldier Sahlmann. The eyes of Schoutissen immediately light up. The name tells him something. Sahlmann, as it turns out, has been registered as missing in Liessel on his website for five years. In the evening, Schoutissen will spend half an hour with the daughter of Sahlmann on the phone in an attempt to give one of the unidentified fallen on the list a name again.

That’s how it is, that’s how Richard Schoutissen is constantly doing. The 45-year-old Deurnenaar estimates that he currently has about 70 investigations and researches under his wing. “Some have been running for three or four years. They are in hibernation until new information is released.”

Schoutissen always thought the war was interesting. As a child he liked to play soldier, the service was not a punishment. But the hobby he developed after that has gotten out of hand. Many hours a week he spends research on – as he puts it himself – ‘often unknown lives and the often unknown death of war victims’. Special attention goes to Deurne. On a separate site is information about all victims who are now known. Allies, Germans and missing. He died in Deurne, or was born there. Almost seven hundred in number. “That number will not be much higher”, Schoutissen suspects.

De Deurnenaar mainly focuses on German victims or Dutch soldiers killed in German military service. That has nothing to do with sympathy, he emphasizes. The ‘enemy’ was often not salvaged, or with much less respect and without extensive administration. Even in the post-war years, the German victims received little attention – compared to the Dutch killed. In short, there is much more to research. There was also a direct reason. Wandering about the German cemetery in Ysselsteyn, he met almost 20 years ago with a woman who was writing a book about her father. She knew quite a lot about his life, but not about his war years. Schoutissen would see what he could do and ‘from one thing the other came’. “That man had served in Poland and Russia, experienced a lot of misery, and finally fell in Lottum.”

Schoutissen now has numerous books, folders and documents. He is a source of information for people with a similar hobby and Dutch and German (government) authorities and is the Dutch subsidiary of the large German site Weltkriegsopfer.de, which has written almost 900,000 victims. He is also sometimes a guide at the cemetery in Ysselsteyn. The quests bring Schoutissen to many places in the Netherlands and regularly to foreign cities and villages.

Sometimes there is a paid order, but the majority is unpaid. He works half-day as an administrator himself. “I did not work part-time for this hobby”, he hastens to say. “At the birth of our children we wanted to have someone at home. That was me. Now the children go to school and I can happily spend a lot of time on the research. “Sometimes, he admits, it is sometimes too much. “Then we go to Austria on vacation and I puncture a day for myself to do DNA research in Innsbrück on physical remains. Then I sometimes feel guilty towards my family. But yes, I want to do those assignments as well as possible.”

I do not get any response from the municipality of Deurne at all. I think that’s a shame.

DEURNE – Richard Schoutissen misses any kind of response to the Deurne municipality in his research into war victims. He already wrote several letters to the college of B and W, but never was there substantive reaction. “In those letters I ask myself the question: can we mean something for each other? Then I’m not talking about sponsoring or something like that. I am thinking more of a way to share and present my information. For example via a digital monument or something. I have mapped all war victims with a Deurnese link, all data is available, perhaps you can do something with that as a municipality. But I do not get a response at all. I think that’s a shame. “