German crosses are increasingly getting a face in Ysselsteyn 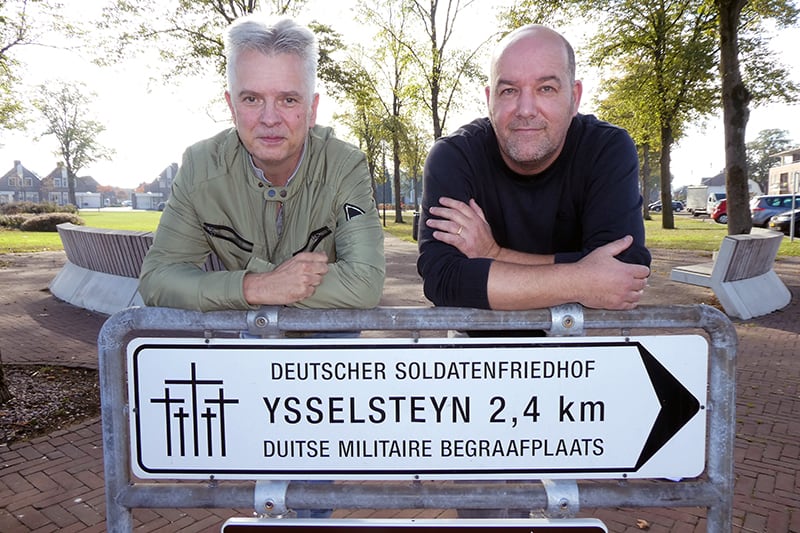 YSSELSTEYN – Schijndel, Wijbosch, Eerde, Sint-Michielsgestel and Boxtel. In October 1944 it was littered with provisional field graves full of fallen Germans. Now they are neatly lined up in Ysselsteyn. There, more and more German families, once ashamed, search for the history of their father, uncle or grandfather.

It is an oppressive face. Crosses as far as you can look. There are more than 30,000 here. The insanity of a war penetrates the German military cemetery Ysselsteyn in Northern Limburg.

‘Junge komm bald wieder, bald wieder nach haus’ sings Freddy Quinn a time after the war. He might best play the melancholy that fits so many dead bodies under those gray crosses. These boys never returned home.

Schijndel counted around the liberation 195 of those field graves, Boxtel 68 and Sint-Michielsgestel 40. From 1947 they are dug up and they come to Ysselsteyn bit by bit.

Fred van den Munckhof and Richard Schoutissen live near the German cemetery. In the past they were gripped by the mass of death here. And that aroused their great interest in this war history.

“Absolutely no sympathy for Nazism. Let’s take away that doubt first, “Munckhof says,” There is no doubt that we are grateful to the Allies for our liberation, but this cemetery makes it very interesting to view the German side of the war history. And often we find all sorts of leads in German sources to help relatives of Allies on their way to clear the history of their fallen relatives “, adds Schoutissen.

Richard set up a War Victims Foundation and, among other things, conducts research into their fathers, uncles or grandfathers for German families. Not infrequently, he also finds very valuable documents in the war archives in The Hague, the archives in Freiburg or Berlin. Often there is also field post between soldiers, where a lot of war history can be read. Time-consuming work, but if you work with passion on such a hobby, then it is worth it. “All interesting information for people who want to know more about how and where their loved ones died.”

Fred helps through the site Findagrave.com to help relatives with their search for fallen family members. Because both know the way in the archives, it is only a piece of cake for Richard and Fred to find fallen Germans from Schijndel, Sint-Michielsgestel and Boxtel. “Jan Arend Hey once made a whole list of where Germans were temporarily buried or found after their death. Up to meters accurate. Local history circles can also get a lot of information there for next year, if the liberation is 75 years ago.”

He picks up Boxtel’s list. Then it appears that four Germans were temporarily buried here at Huize De La Salle. The Allies had arranged a hospital there. Further on in the list of several dozen Germans killed in and around Boxtel, the former Franciscusschool appears. There was also a military hospital where Germans died from their injuries.

Schijndel’s list is impressive for a long time. This obviously has to do with the front line from 17 September 1944 and the Operation Market Garden. The Allied forces were continually on the move with the Germans around Schijndel, Wijbosch and Eerde. During the grenade weeks, field tombs were made here for dozens of Germans in dozens of places. All details of the locations are in the list. One of them was even found at the Jewish cemetery. “For people from Nijmegen who want to know a lot about the war, these lists are very interesting,” says Fred van den Munckhof.

A list was also drawn up for Sint-Michielsgestel. In places at the Institute for the Deaf, the juvenate of the Ruwenberg, and at Nieuw Herlaer and along the old road to Den Bosch, several killed Germans were laid in field graves, to be later brought to Mierlo first. Then they went on transport to Ysselsteyn. “A good number of German victims were first wrapped in mattress covers. Coffins were far too expensive. Later in time, many black plastic bags were also used to put the bone remnants in.”

Now that it is almost 75 years ago, Munckhof and Schoutissen see that more and more German families are looking for their fallen relatives. ,, You can not help them all ahead. We do not have the time for that. But now and then families come. We pick them up at the station in Deurne and then take them to the graves. Even if you have nothing with those families, sometimes you see poignant scenes and lots of emotions. “

According to Schoutissen and Munckhof it is satisfying if they can help relatives by telling them the personal history about their fallen family member. “Some people do not want to know anything about it either. We naturally respect that. But it sometimes gives resignation when they know the story. This way every German cross gets a face again. Even though there are still 4.869 soldiers buried here without a name.”