The War Victims Foundation fears that the German war cemetery in Ysselsteyn in Limburg will turn into a tourist attraction now that a new visitor center with small catering facilities is being built there. “Such a memorial site with almost 32,000 war dead must remain silent and sober.”

In recent years, Fred van den Munckhof from the War Victims Foundation has tried to change the municipality of Venray, which includes Ysselsteyn, and the province of Limburg. “But provincial, municipal politics and other people involved nevertheless opted for the so-called ‘tolerance center’. A striking building from 1957, which perfectly matched the atmosphere of this only German war cemetery in our country, has since been demolished. an ‘attraction’ of around 2.6 million euros where you can grab a beer with a view of all those concrete burial crosses Highly inappropriate Believe me: there are Germans in Ysselsteyn where, if they had lived, you really do not wanted to drink with.”

The War Victims Foundation investigates the backgrounds of Germans in particular who fell in the Netherlands during the Second World War. The organization tries to give a face to the Germans buried in Ysselsteyn, purely out of interest in war history and completely impartial. In this way more has become known in recent decades about the background of the dead.

“As a result, we can also provide information to the relatives, who are still visiting the graves of their fallen relatives. Just like us, that group of people is horrified by the idea that Ysselsteyn may be transforming into an educational fair in the near future. The visitors want being able to commemorate in peace and quiet “, Van den Munckhof assures. “Without children playing or a crowd of tourists.”

According to Van den Munckhof, there are not only Germans in the cemetery, but also Austrians, Poles, Dutch (550 SS, traitors or collaborators, ed.), Russians and people of other nationalities who have somehow served at the Nazi-German forces. “We want to leave them alone, purely from a historical perspective. But no, the initiators prefer to give this loaded place a tourist, educational twist. By turning it into a kind of attraction, all those thousands of dead are actually marketed commercially. absolutely not.”

He thinks that the visitor center can be built in 2019, because there are fewer and fewer people who have experienced the Second World War. “There is less opposition. Twenty-five years ago such a thing could never have happened in the Netherlands,” Van den Munckhof assumes. “But now that the last war generation is almost gone, this delusion is being pushed through quickly.”

This equals dancing to dead enemies

Stopping things is no longer possible, he knows. “But I wonder what the rest of the Netherlands actually think of this. I have the impression that almost no one knows what Limburg governments are going to get out of here. Maybe the rest of the Netherlands wakes up and protests and a building stop still come I sincerely hope so. Because beers and, who knows, soon pancakes and a merry-go-round? That is equivalent to dancing on dead enemies.”

The initiators are not aware of any harm. The new education center at the cemetery, which attracts around 25,000 visitors annually, will feature multi-purpose spaces for lectures and exhibitions and places for commemoration. The building is funded by the municipality of Venray, the province of Limburg, the National Fund for Peace, Freedom and Veteran Care and the German government.

The municipality of Venray calls the center important because of the “educational and tourist objective”, is stated in the permit issued. Van den Munckhof and his colleagues from the War Victims Foundation still have to see it all. “The local tradespeople and others will undoubtedly benefit financially. We will keep a sharp eye on developments and will intervene appropriately when things start to get out of the way. Because those dead, no matter how wrong, have to rest in peace And even worse: this Venray playground must be opened on May 5 next year. On National Liberation Day.” 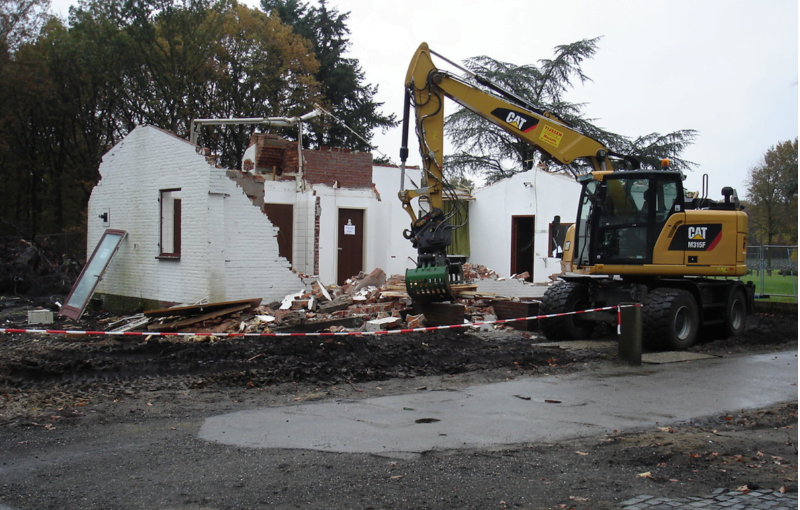 The gatehouse at the cemetery in Ysselsteyn has already been demolished