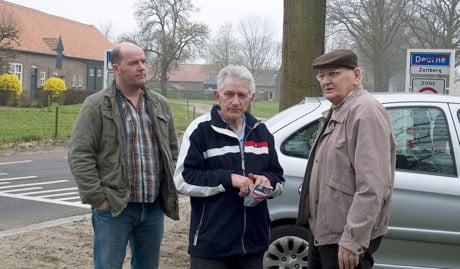 Sunday, September 24, 1944; a sunny day. It was fine weather when I stood in front of our house as a little boy and saw how the first English tanks drove in the Zeilberg. They came from the direction of the Soertsebaan and drove towards the village. On the first tank was written with chalk letters “Greetings from Liessel”. When the first tanks had passed and probably reached the village, we heard a big bang. My dad was terribly worried because my mother had gone to church.

Just before noon my mother came home, completely stunned by what she had experienced. She told us when the Holy Mass ended, and she went home, a German vehicle arrived. They were warned by these Germans to take cover. Later, when they were all safe in the basement, they heard a big bang. After an hour everything was quiet again, they could go home. On the way home they saw the result.

The vehicle on which the Germans sat had been struck by an English tank by a direct hit. All Germans, six in number, were killed instantly. Passing by, my mother thought: “Thanks to these people I am still alive and now they are dead themselves.”

On August 20, 1947, the six soldiers were dug up again and transferred to a war cemetery in Ysselsteyn. They were all buried as “a German soldier”. Three of them could later be identified, but the other three still have no name.

Sixty years later, in the archive, I found the letter from a worried mother in Bellstedt, Germany, a place with 900 inhabitants in Thur in the middle of Germany. She inquired, inter alia. after that, whether a certain Hermann boy, born on 17 July 1926, would be buried there in the cemetery in Zeilberg. She had heard from the “battery chief” that her son was reported missing on 24 September 1944 in Zeilberg. Since then, she has not received any sign of life from him. She would have liked to receive an answer to visit her son’s grave. Unfortunately, the grave is still unknown today.

I went in search of soldiers who fell in Zeilberg and discovered fifteen field graves by means of the Deurne archive. After much research, I was able to find the names of these soldiers. I was particularly interested in the six dead men who were buried near the estate of Lambert van den Broek. I knew three of them under the names Theodorus Reuser, Heinz Braun and Helmuth Fink. The three others were unknown. Could one of them be Hermann Junge?

Through Richard Schoutissen, who had done good work for years to get the names of fallen soldiers, I got in touch with the son of one of the six German soldiers who sat in the German tank. That was Martin Reuser and it turned out he was Dutch. He was convinced that his father had died somewhere in Limburg.

Together we went to the place where his father fell on the 24th of September and I was able to tell him the exact place. Since he was buried at short notice. Emotionally he said: “I finally found the place where I searched for so long. I really wanted to know that because he is and will always be my father. “

He told the story of his youth. Both parents have been members of the NSB. “I never knew my father. He fell somewhere in Limburg, at least that was assumed. My mother remarried and never wanted to talk about it. I have never seen the wedding photos. My father never spoke again. My mother just said that his entire family was no good and that he had hooked her up. Although later I realized that many of her family were NSB people. In any case, her father and brother and other family members sympathized with this movement.

That’s what I discovered when I was about 15. I have been, as I grew older, with my grandparents in Tiel. They were terribly frightened because they did not know me at all. My mother had kept me away from them. I had a bad youth. Great brought without a father and a mother who had also had a miserable life; she gave birth early-that was only three years old. After the war, they shaved my mother’s head. She spent many years in prison as a punishment and everyone avoided her. During this time I was at boarding school with my sisters. My mother married again and came home. A strange man and a mother who was alien to me.

What brought our family even more apart was the misfortune with my half-brother. I had my seven month old brother on my lap. He pulled on the oil stove where the kettle was filled with tea. Like both, boiling water was poured over them. He died of it. The relationship with me never got better. After so many years, you want to know the truth. I could only after the death of my mother in the archive of the Ministry of Interior. I was able to see the files, but it was very little. Just a photo of my dad in uniform. But now that I stand here on this site, my search is over. I now know where and how my father fell. “

“Yes,” he said, “my father made a big mistake, but it is and remains my father.” To which I replied, “Although he made a grave mistake, he did good in the last minutes of his life. He and his buddies warned the churchgoers, including my mother, of the danger, which allowed them to reach the safe shelter! “

He shook hands with me. I saw that it was good for him.

He went to Ysselsteyn with Richard Schoutissen to visit his father’s grave. Then I went home thinking that I could give a child from wrong parents a good feeling by my search.