Through grave historical research, commissioned by the burial service of the Dutch army BIDKL (Bergings- en Identificatiedienst Koninklijke Landmacht), I contributed to the re-identification of a (then) unknown German soldier at the German military cemetery in Ysselsteyn. 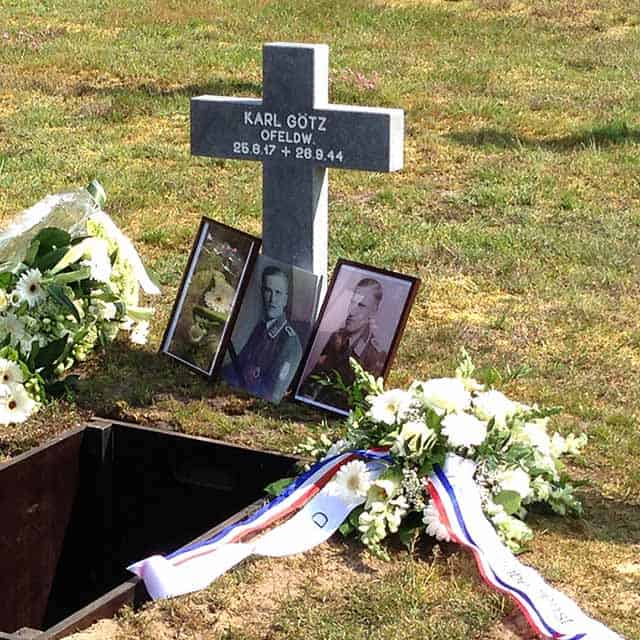 German Embassy The Hague, Thursday 24 April 2014
Among the more than 32.000 graves that can be found at the German military cemetery Ysselsteyn in the province of Limburg, more than 5.000 without a name on the grave cross. In these graves are soldiers of the former German Wehrmacht who fell during the Second World War in the Netherlands and who could not be identified at the time of their funeral in Ysselsteyn in the 1950s. One of these soldiers was Oberfeldwebel Karl Götz, who fell as a paratrooper on 26.09.1944 at Wijbosch in space ‘s Hertogenbosch. His family received his death message at that time, but his grave was never found.

Now this unresolved fate could be solved. The burial service of the Dutch army BIDKL (Bergings- en Identificatiedienst Koninklijke Landmacht) in Soesterberg had, after extensive research and archival searches, determined that the dead man lying in Ysselsteyn in the nameless tomb TF-6-67 was Sergeant Karl Götz could act. With the help of the military attaché staff at the German Embassy in The Hague, a surviving son of Oberfeldwebel Götz was found through the Volksbund Deutsche Kriegsgräberfürsorge and the German office in Berlin, the former Wehrmacht information point. A DNA comparison brought the BIDKL the result hoped for from many sides: The saliva sample given by the son in Stendal / Saxony-Anhalt had the same DNA as the sample taken from the bones of the exhumed soldier in Ysselsteyn!

Kurt Götz, now 75 years old, could now, visibly moved, say goodbye to his father together with his wife and other family members. He had tried for years to find his father’s grave, but as a citizen of the GDR, it was not possible for him to contact the above-mentioned authorities.

But even after the fall of the Wall, it took almost 25 years until he could stand at his father’s grave in Ysselsteyn on 24 April 2014. Since that day, the cross on the grave with the description TF-6-67 bears the name of Major Karl Götz and his date of birth and death.

A Dutch and a German clergyman, a group of schoolchildren from the cemetery’s youth meeting place and soldiers from Logistics Battalion 142 from Torgelow were present at the ceremony, during which Major Götz’s bones were reburied in the now-named grave.

For a fortnight, the soldiers of the Logistics Battalion support the Volksbund Deutsche Kriegsgräberfürsorge in maintaining the soldiers’ cemetery.