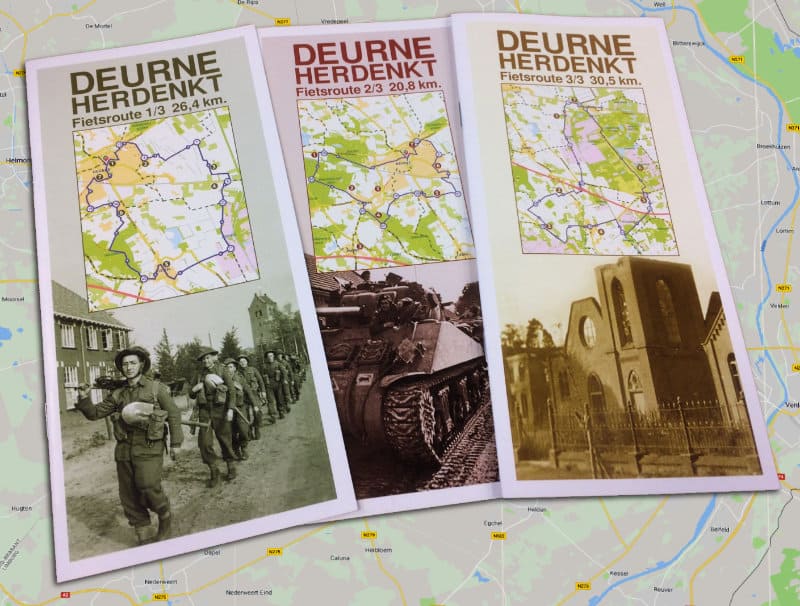 DEURNE – From Sunday 5 May, free cycle route booklets will be available at various locations in Deurne on the theme: Deurne commemorates. The cycling routes are an initiative of Cees van den Broek and Richard Schoutissen from Deurne. The route books contain stories of events that took place at locations in the routes. (download here)

The first route book starts with the story of George Foster, lieutenant of the Green Howards of the Yorkshire Regiment. During the liberation of Deurne, the regiment moved from Zeilberg via the Molenstraat through the Lindenlaan to the Kerkstraat. George Foster was fatally hit in the Molenlaan by machine gun shots. He received a temporary grave in the garden of the Stevens family on the corner of Molenlaan and Kerkstraat, which was cared for by the entire neighborhood. The Special Voluntary Landstorm formed a guard of honor. Georg Foster was later buried again in the war cemetery in Venray. He was 31 years old.

Crisishoeve
The route continues, among other things, along the Crisishoeve, which was the home of the resistance fighter Martien van den Eijnden, who was killed by German occupiers at the age of 27. Along various former hiding places, the memorial monument on the Mgr. Berkvensstraat in Liessel and a memorial cross on the Hazeldonkseweg between Liessel and Vlierden.
The route in the second booklet goes in the direction of Vlierden and passes, among other places, where the 21-year-old Maria van Otterdijk from Vlierden was killed in 1943 by a shelling from a passing train. Via the Vlierden forests it goes past Boerderij Van der Putten on the Vlierdenseweg; a hiding place for many foreign pilots, Russian soldiers and Dutch Jews. Via the Baarschotse Heide the route continues over the Breemortelweg and the Zeilbergseweg towards the Haageind. The route passes through the castle ruins of which the lord of the castle Theodore Baron de Smeth was very actively involved during the war in the illegal resistance against the German occupier. The routes in the third book go via the Leegveld to Neerkant. The church and the parsonage in Neerkant were completely destroyed in October 1944 by the explosion of a German ammunition tank. This stood in front of the church and suffered a direct hit from American artillery.

Forced labour
Across the Vuurlinie it goes to Helenaveen, past the statue of the hunter who killed the pig, recalling the church raid in 1944. Around 2,000 men and boys were arrested during the raid and transported to Germany to do forced labor. The route passes Toon Kortoomspark where on the other side of the railway line the battle for the Peel was conducted. Two Deurnese brothers, 19-year-old Willem and 17-year-old Leo van der Zanden came across the lines after an escape from German captivity, in which they had to dig anti-tank ditches near Venlo. In the battlefield between Griendtsveen and Zeilberg, Leo stepped on a mine and both brothers were killed, a few kilometers away from their parental home on the Zonnewende in Zeilberg.

Practical information
The cycle routes have a length of approximately 26, 20 and 30 kilometers. The routes have been compiled on the basis of the junction cycle route network. Starting points include the Markt in Deurne, the nature gate De Peel on the Leegveld, the House in Vlierden and the Dorpsstraat in Neerkant. A qr code on the back of the cycle route booklets gives access to more war stories on oorlogsslachtoffers.nl.
The route booklets were partly created with the support of the municipality of Deurne, which supports initiatives organized within the framework of Deurne 75 years of liberation. The booklets are therefore issued free of charge. The latter has cost Richard Schoutissen and Cees van den Broek a lot of work, according to the latter. “Rather than putting the routes together, it took a lot of time to check on historical facts in the stories and get permission from those involved,” says Van den Broek.