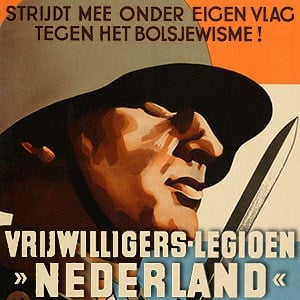 Apart from the so-called ‘Reichsdeutsche’ (literally translated “Germans of the Reich”) who were obliged to enter into German service, in Deurne there were also people who made a ‘wrong’ choice before and during the Second World War by joining a certain political group or by engaging in foreign military service. Often these choices were made because they were misinformed by the German propaganda machine or to avoid the so-called ‘Arbeitseinzats’, but of course Deurne also knew people who made this choice conscious because they were simply pro-German. The author has a difficult theme here, as he recently experienced when he made a few additions to DeurneWiki (a project from the local circle H.N. Ouwerling) in the article by Wilhelmus Antonius Maria van Heugten about his past.

Shortly after this addition, the author was surprised with a few e-mails and phone calls with the explicit request to delete them. The real reasons can be imagined, Wilhelmus Antonius Maria van Heugten was co-founder of the local circle H.N. Ouwerling and there was still a friendly contact with one of his children, but that aside.

After the Second World War, Van Heugten made a credit for the Deurnian community, among others, as a co-founder of the local circle H.N. Ouwerling, as editor-in-chief of the Weekblad voor Deurne, as a member of the central management of the Bijenhoudersbond of the NCB and as a member of the Literary Café Deurne, the author is well aware of this, but in addition he thinks that this black silk also comes to light comes to come to a balanced story.

In the section ‘Collaboration and land treason’ you will soon find more information about some Deurnenaars who made a ‘wrong’ choice at the time to start with Wilhelmus Antonius Maria van Heugten, for the above reasons but also because the most archival material has been preserved. Later, as a visitor to this site, you will also read additional information about the Doormen Emilius Franciscus Johannes Maria van der Ven, Anne Marten Blaauw, Adrianus Wouterus van den Bogaart, Johannes Verstapen and Henricus Franciscus Theodorus Bernardus Gijsbers who, because they were in foreign military service, Dutch citizenship lost but as stateless this Dutch citizenship after many years through naturalization regained again.