Baptized and formed during the liberation of Liessel 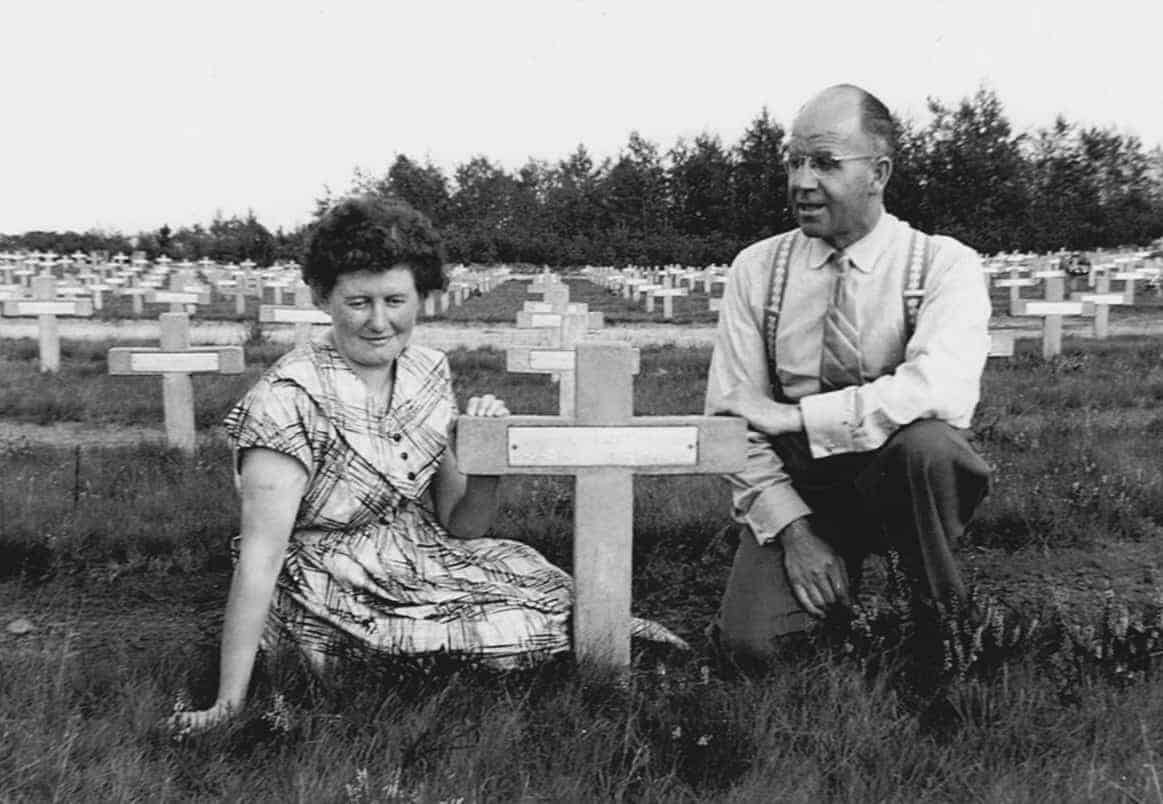 Memories of Anneke Slaats-Janssen from Liessel
… recorded by her son, Cor Slaats

During the “first” liberation of Liessel on Saturday, September 23, 1944, heavy fighting took place in the area around the Loon. The German soldier Erich Rädel was wounded in those fights. He was hit by night in a ditch, which ran along a dirt road between Vossenweg and Hazenweg (between Graord de Zaoger and Willem van Stratum) in the belly near the liver. Erich Rädel was wounded at the back door of Father’s house and called for pity. Grandfather Slaats, father and mother were in the shelter and there were also grandfather Janssen and uncle Willem because the basement of the Slaats family was deeper and therefore safer. Father heard the German soldier and he let him in.

The injured person asked to take off his shoes because he was so troubled by his stuffed feet. The clothing was very bloody. Father and mother helped him with undressing, washing and re-dressing with father’s clothes. Neighbor Manders, the contractor, brought bandage material to stop the bleeding. At the beginning of the morning, father went to get help in the parsonage where there was a Red Cross post. However, the village was closed and Lens van Oosterhout (Lens Pówel) stopped father. When he heard why father wanted to go to the village, he reacted with “Laot hum damn damn”. Father answered, “It is a man,” and walked on. A doctor then came along, that was Dr. Schellekens who would become the family doctor of our family after the war. The doctor gave the wounded soldier a morphine syringe against the severe pain. He advised that the soldier be served and he arranged for a priest to be warned. That was chaplain Simons who was hiding at the time in Hazeldonk near Harrie Smits of the “wit heuske”. The chaplain asked the soldier if he was baptized. Erich Rädel remembered that he had been baptized, but told me that he had done nothing about faith afterwards. That is why he was baptized and formed again. Then the confession was heard and then it was operated. Father and mother became godfather and godmother of the baptist. Aunt Bet (she lived opposite at L225a, Loon 8) came to help with all this. The wounded soldier thanked father and mother very much for the good care. He became very ill afterwards and had to throw up a lot. A little later that morning he was picked up by the Red Cross and they were two Scottish soldiers. Erich Rädel was then very afraid that something would be done to him, but the Scots tried to calm him down. At the departure he gave father and mother the hand and again thank you very much. He was taken to the military hospital in Mierlo. Personal belongings of that soldier were left with my parents: jacket, notebook, wallet with photos and letters. After the evacuation, at the end of October 1944, after the notorious German counterattack, those things were found to have disappeared.

Only after the war, when the military cemetery for German soldiers was opened in Ysselsteyn and my parents visited there (photo above), did it appear that Erich Rädel was buried there. He died two days later, on 25 September. That German soldier was actually with the Luftwaffe, but when the German Air Force had too few planes left, he joined the infantry. He was born December 11, 1905 and has become 38 years old. After the war, my parents sent a letter to Rädel’s wife. Her name was Anna, she had a 14 year old daughter and lived near Berlin. That letter has returned undeliverable. In Ysselsteyn, information has been left behind in case somebody ever inquires about Erich Rädel, but there has never been any response.

Follow-up investigation by Stichting Oorlogsslachtoffers
Through this website Cor Slaats came into contact with the Foundation for War Victims with the question if I could find out more information about Erich Rädel. I quickly found the following information in my archive; Obergefreiter Erich Rädel, born 11-12-1905 and bearer of the Erkennungsmarke (identity plate) -42- Fliegerhorst-Kommandantur A 8 / III died on 25-09-1944 in an allied field hospital in Geldrop from where the body was wrapped in a blanket , was buried at the German military cemetery in Mierlo (box 4, row E, grave 5). This temporary cemetery was constructed on the left next to the British Field of Honor (Mierlo War Cemetery) on the Geldropseweg in Mierlo. In the report of transfer of the remains of Mierlo to Ysselsteyn (box P, row 9, grave 214), this happened on 10/14/1948, unfortunately no further evidence was found, with the exception of the dental status and the state of decomposition of the remains.

I was later able to find out in the German archives that Erich Rädel was born in Kunzendorf, and as Obergefreiter der Reserve after his military career at Fliegerhorst-Kommandantur A 8 / III (Dievenow Air Force Base in the former province of Pommern) at the 4. Batterie misked Flakabteilung 466 (motorisiert) served. After some investigation I found out the address of Erich’s wife in Wernburg-Köblitz but Anna had also died in the meantime, after further intensive investigation, the address of Liselotte, a daughter of Erich and Anna, was eventually found in the town of Hamm. Her telephone number turned out to be closed and an answer to two letters that I wrote to the known address unfortunately remained unanswered …