At the beginning of the German occupation, Adrianus Wouterus van den Bogaart, who at the time lived with his parents at 22 Drietipstraat in Helmond, worked as a bricklayer, but every now and then he was out of work. Toon had no political affiliation, nor was he a member of the National Socialist Movement (N.S.B.). In 1942, he responded to a call-up for labour service with the Dutch Labour Service (N.A.D.). The labour service performed “public works for the common good”, and as a labourer he worked, among other things, on building roads and canals. After five and a half months, when his compulsory time with the N.A.D. was over, he did not sign on, but went back to his parents where he remained unemployed for about three months until he was called up for Arbeitseinsatz (labour deployment). 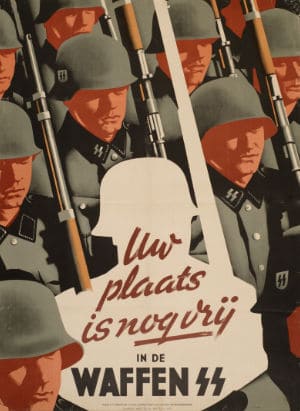 The Arbeitseinsatz was mainly meant to employ foreign workers from the German occupied territories for the war industry. Toon did not want to go to Germany, panicked by a repeated call-up and inquired at the N.A.D. about his possible options to avoid working in Germany.
He may have tried to sign on so that he could stay in the Netherlands, but in all likelihood the N.A.D. officer advised him to volunteer for the Waffen-SS with the chance of remaining in the Netherlands. Possibly this meant the SS-Wachbataillon Nordwest, which was set up in January 1942 and whose tasks included guarding concentration and internment camps in the Netherlands.

On 16 November 1942, Toon volunteered for the Waffen-SS, a risky choice since he now also ran the risk of being sent to the Eastern Front.

On 29 November 1942, a short training period of three days began in The Hague, he received his uniform and was placed in a hospital in Den Bosch. He had no military training and his blood group sign was tattooed on the inside of his left upper arm. Toon was occasionally given short home leave but always tried to appear without his uniform. If he was in uniform, he waited until it was dark and took it off when he got home. Once on leave, he carried a rifle, but this was highly unusual. Because Toon had volunteered for German service, his mother received money and extra coal.

In June 1944, the tension became too much for him and he decided to flee from the hospital to go into hiding with his girlfriend in Almelo. They only got as far as Nijmegen, however, and Toon was arrested and sent to Arhaus in Germany for Arbeitseinsatz, which he initially tried to avoid. But here too, Toon got the chance to escape from the Germans and went into hiding with his girlfriend in Almelo after all.

In January 1945 things got too hot for him in Almelo and he went to Wierden to hide at a farmer’s house. Not much later the farm was searched and because Toon (pseudonym: Johannes van den Kerkhof) could not show valid papers he was taken to prison in Almelo. The next day he was transported to Gronau in Germany but luck was on his side again because the very next day he got the chance to stay out of the hands of the Germans and fled back to the Netherlands, back to Wierden. Again he went into hiding with a farmer, this time in the farm of family Roelofs at the Burgemeestersdijk 14 in Notter (a hamlet in the municipality of Wierden). He stayed with the Roelofs family until December 1945, but during this period he managed to visit his parents in Helmond every now and then.

On 5 January 1946 Toon and Harmke settled in Almelo (Kalkovenweg 17) and not much later Toon responded to a newspaper advertisement for a job as a nurse/concierge at the Volkssanatorium in Hellendoorn, for which he was hired. On 5 April, Toon was arrested in Hellendoorn by the Almelo police and imprisoned. From his imprisonment in Almelo, he was transferred on 12 April 1946 by a detective to Camp Vught for internment where he was interrogated on 17 April by the Helmond political police. A note dated 25 February 1947 to the Political Investigation Department (P.R.A.) in Eindhoven states that Toon was sentenced to 2.5 years imprisonment in Camp Vught. However, during his imprisonment, Toon also worked for some time in the penal camp for “wrong Dutchmen”, mining camp Julia at Eygelshoven.

On 26 January 1948, Adrianus Wouterus van den Bogaart was granted parole and Chaplain Hansen was appointed to act as his “probation officer”. During this period he had to live with his parents (Drietipstraat 22 in Helmond), look for work and stay away from former friends who might have a bad influence on him. He behaves well, he keeps to the limits of his parole and there is a stable family situation. 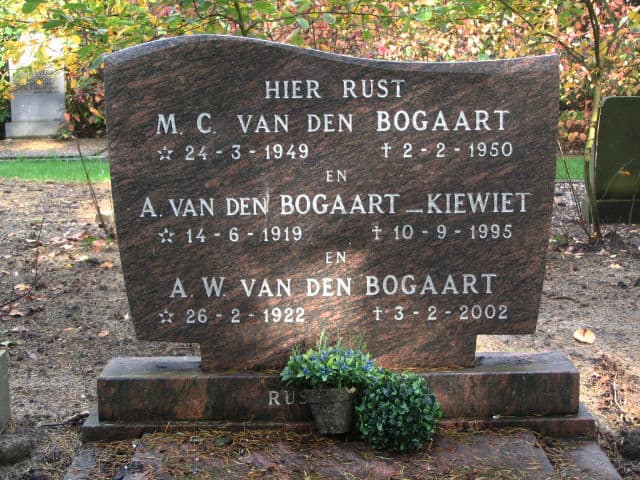 On 24 April 1948 Toon and Harmke get married in Helmond, they live together in a small house and Harmke struggles with the fact that Toon is stateless. On 10 July 1948, they moved back to Almelo (Kalkovenweg 17) and on 24 March 1949, they got a little daughter named Maria Christina. Toon behaves exemplary, does not drink, has a job, has money and gets along well with the neighbourhood.

On 7 October 1949 his parole ends, four months later their daughter dies. In 1953, the Dutch State introduced a law by which stateless Dutch people could regain their Dutch citizenship. Toon and Harmke continue to live in Almelo, their last resting place is a family grave at the cemetery ‘t Groenedael in Almelo (Section 4, Tomb 3325, Box 7).

The above story shows again that Dutch volunteers had various motives for joining the German service, by no means all of them were convinced National Socialists.