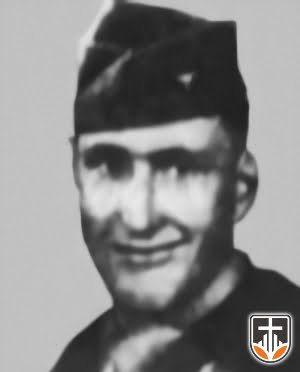 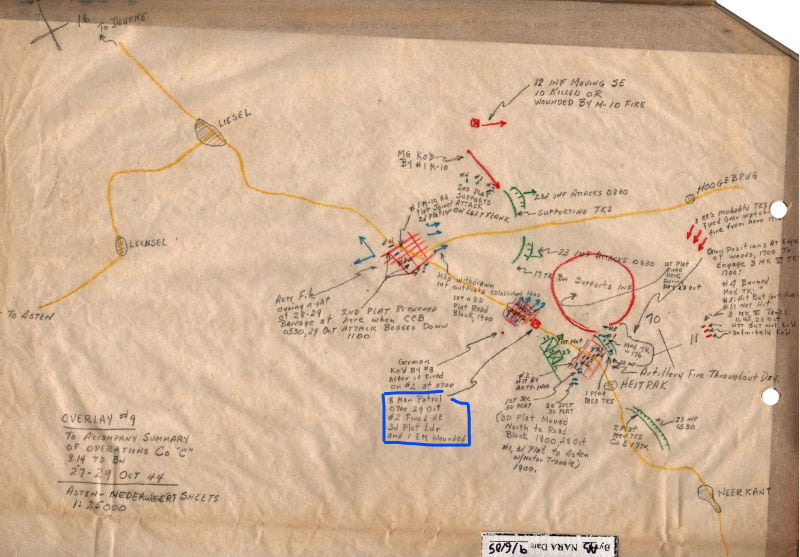 814 TD After Action Report, Oct 44 (pp. 6-7): C/814 attached to TF Wemple CCB, events on 29 October 1945:
“Around 0700 a German patrol approached the third platoon position from the South (see overlay). The third platoon leader and driver of #2 destroyer advanced toward them on foot in an effort to make them surrender and were wounded. The platoon leader called to his #2 gun to open fire and it moved up and fired HE into the bushes where the Germans were hiding. Arms and legs flew up. A German bazooka man fired at #2 gun from back of a house. (See overlay #9) and #3 gun swung around and gave him a round of HE. The crew of #2 gun moved far enough forward so that the gun commander could lift the wounded driver on the rear deck. The Plat. Ldr. lying on his back was too seriously wounded to be handled that way and he ordered the gun to keep firing and to send the Medics for him. #2 gun attempted to back up, hit a tree with the tube and the gun swung around, knocking the driver and the loader who was holding him off the rear deck. The Gun Commander picked them up again and took them to the Medics. The platoon leader was evacuated by Co. C aid men under heavy small arms fire.”
This prior entry and overlay #9 establish the position:
“The third platoon was now given a road block mission and moved into position by dark (see overlay #9). The mission was to block two secondary roads against attack from the East.#1 destroyer, third platoon had gone to Asten with motor trouble. Out posts were established and security dug in.”
The position was just north of Heitrak.

Gare la Bête (814 TD History by Calvin Boykin, pp. 59-60): supporting C/814 near Heitrak, Holland –
“Robert C. Fry of Great Bend, Kansas drove an M10 tank destroyer in the 814th’s Company C. … Company C then moved to Liesel and stayed for a few days, then moved out to defend along a road, spread out with much space in between destroyers. Fry’s account continues: ‘At dawn the next morning 29 October I was on guard in the tank destroyer when I saw Germans walking up from behind us. I woke the crew up to get ready. The platoon officer [WJ: 1st Lt. Burrell Woodell, 3/C/814] was just going down the ditch on the other side of the road, waking up the Security Section, when he was hit by machine gun fire. I jumped out of the driver’s seat to help him, but as soon as I hit the ground I could see he was already dead. I saw two Germans crawling across the road to our right. I shot both of them, then I was hit by machine gun fire in my left leg and thigh. My gunner, Sergeant Jules Norris, jumped out and lifted me up on the back of the destroyer to get me to the medics. Norris was driving and ran the gun into a tree causing the turret to spin around and knock me off to the ground. This happened in front of a small house that Captain Donald Reid was using for headquarters. The medic jeep came to pick me up, Medic Raymond Dye and his driver, Arthur Bosley, had already made several trips back to the British field hospital that morning, going through Liesel. The German officer was out in front and he was waving at his tank crew not to fire on us, but they did anyway. The shot hit the jeep and spun it around and set it afire. When it spun it threw us all off. A piece of the jeep had hit me in the right hip and caused a big cut. Dye was thrown head first into a brick wall by the schoolhouse. Bosley was in the middle of the road. They shot him in the head. My assistant driver, who had been wounded lay still and they didn’t bother him. They looked at me, and I guess they figured I was about gone. They knelt down, wrote my name and serial number from my dog tags, and walked away. The assistant driver and I crawled into a small stone building to hide. I can’t remember the assistant driver’s name, for he had only been with us two days. After a while shells started falling in the town and we heard the Germans move out. Then we heard some English talk, and we yelled at them and they took us to the field hospital. …”